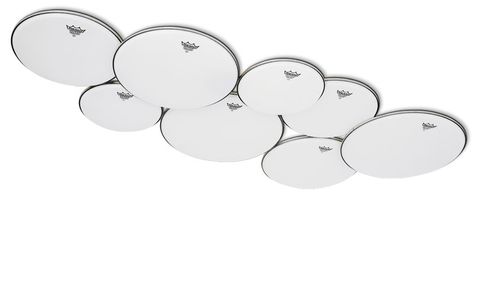 These heads are as versatile as they come and are priced the same for either the Ambassador weights or the Emperors, depending on your preference.

Remo boasts "the most recorded drum heads in history", and happen to manufacture one of the world's most successful drum head series - the Weatherking. The White Coated Ambassador is widely accepted as an industry standard by many drummers, remaining virtually unchanged since the original was produced over 50 years ago.

First aired at the Winter NAMM show earlier this year, the new White Suede heads are the latest additions to Remo's Weatherking series. We have a comprehensive selection of the brand new heads in both Ambassador and Emperor weights and in the sizes specified for the toms on my kit comprising 10", 12", 14", and 16" diameters.

Viewed as a head hybrid, the White Suede are a mid-way point between coated and uncoated models. These are said to "provide focused warmth and maximum mid-range tones for snare and tom toms that have a soft feel and percussive attack". As yet, the White Suede models are limited to either the dual-ply Emperors (7.5-mil x2) or the single-ply Ambassadors (10-mil) and are available in all the popular sizes from 6" to 20" diameter.

Remo's White Suedes are based around their Smooth White drum heads but these have a unique texturing process applied. This is actually etched into the upper surface of the drum head, effectively fluffing-up the Mylar, making it feel much like suede. It is this etching process which awards the heads with slightly more warmth and possibly even a slightly deeper tone than a standard white model. As the texture is not a coating, per se, rather an integral part of the head, it shouldn't be subject to the same wear as a coated head.

To test these plus new Remos, they are going onto our maple kit, which we use for most of our acoustic-type gigs. In this sort of environment, we like the drums to resonate as much as possible, squeezing every last bit from the drum acoustically. We stick with the basic principle of the more the drum and the head are allowed to vibrate, the further away it can be heard - more projection!

Prior to this review, this writer's toms were each fitted with clear Remo Ambassadors for both the batter and the resonant heads. Off come those old batter, leaving us to clean and wax the bearing edges. On go the set of new White Suede Ambassadors and we begin the process of tensioning and tuning. There are the usual cracking sounds as the heads stretch and slide their way, bedding into the bearing edges.

With each head tensioned just over their wrinkled/flapping stage, it seems there is no loss of sustain over the old clear Ambassadors that were once on the toms. Pitched this low, the drums sound suitable for some rock, though we think Emperors may fare better for this genre, given they are more resilient. When cranked up, this is where the drums/heads really open up, producing bags of sustain with just a smattering of warmth.

These are versatile drum heads responding to each strike with a reasonably level attack, followed by an element of warmth and richness. Whisking them up further through their huge tuning range, makes them equally at home for jazz too and the texture (while not quite as crisp as with coated heads), sounds good with brushes. Ultimately, it's the tuning versatility these offer that will make them suitable for almost any popular music genre.

The Emperors are next onto those maple shells to begin exactly the same process of stretching, tuning then, eventually, playing. With the first few strikes these heads appear noticeably warmer than the Ambassadors (compared to the White Suede and markedly more so than our old set of 'clears'). There is a definite softness and roundness to the overall tone but we think the Ambassadors have the edge for attack and crispness. In fact the difference in attack is much like the effect of sticks with either nylon tips or plain wood - it is quite obvious.

The same cannot be said about volume as we think they are on a par here, but there will be a marginal difference in projection as the Emperors generally don't appear to have the lengthy sustain as with the Ambassadors.

There is no noticeable difference in volume but in terms of substance the drums fitted with these Emperors have more guts and bottom-end where the 14" and 16" toms appear to be quite potent.

As usual, it's horses for courses here - if you demand versatility and are after a marginally deeper, slightly darker tone, but your heavy-hitting playing style needs the resilience offered from the twin-ply Emperor - then these White Suede versions could be worth a look.

For a drummer who enjoys an open tone but with just a little more substance, the highly versatile White Suede Ambassadors are worth serious consideration.