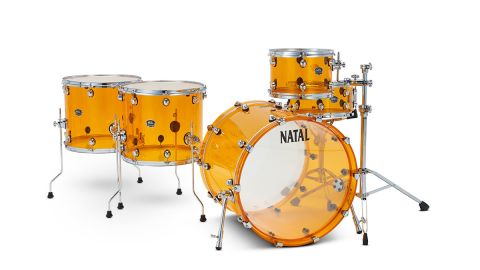 Overall this is a punchy sounding kit, designed for live use. Well suited to heavier players and styles of music. Fair build quality and a steal at the price.

Since the initial popularity of acrylic drums in the 1970s (thanks mainly to John Bonham and his famous Ludwig Vistalite) most drum companies, it seems, have tried their hand at a see-through kit.

Following a resurgence over the last 10 years or so, the plethora of options on offer include recent offerings from DW, Pearl, Crush, Forecast, Pork Pie Percussion and more. We can now add British drum and percussion manufacturer Natal to this list with the release of the Arcadia Acrylic kit.

Having been hugely impressed by the surprisingly low-cost yet high-level craftsmanship of the company's wares in recent years (for example, check out our recent Pure Stave snare drum and Arcadia kit reviews), it seems only right to get a little enthusiastic at the prospect of another winning creation.

As a new addition to the Natal Arcadia series, the kit in question shares many of the same attributes as its brothers and sisters.

These include the low-mass Arcadia lugs (which are shrunken versions of the Natal Sun-lugs found on its Original series), 2mm triple-flanged chrome hoops (chosen for an open and resonant sound), two low-profile black and chrome 'Natal Arcadia' badges on each drum, rubber gaskets on the bass drum claws (for improved tension and hoop protection) and stock Remo UT heads.

The Arcadia also boasts the use of Natal's new ball-joint tom bracket, a feature which it shares with its higher-end cousin, the Original series.

It is also worth noting that despite the one shell-pack currently on offer, all Natal drums can be custom ordered directly and therefore any configuration requirements are achievable. The seamless transparent shells are available in three colour options: Clear Trans, Red Trans and Orange Trans (as review). The tom and snare drum shells are 6mm thick while the un-ported bass drum is 7mm.

Considering that every nut, bolt and screw gracing these shells is on display through the transparent shells, it is clear to see (with no pun intended) that Natal has done a sterling job in the workshop and all hardware looks neat and tidy. That said, perhaps the use of smaller washers on the back of the lugs might have been possible as they do protrude slightly from behind the rubber gaskets when looking square-on from the outside.

Still, from a distance you'd be hard pushed to spot the overlap. A few paces back and you are left to simply admire the deep amber hue of the immaculately seamless shells, complete with shiny chrome hardware.

We must confess to a slightly giddy feeling of childlike excitement whilst taking the first drum from its box. There is just something about an acrylic kit that, love 'em or hate 'em, is just a little bit special.

This kit accompanied us on a couple of pop function gigs where it instantly stole the limelight in terms of stage presence. With the amber shells glowing a fluorescent orange under the stage lights, it looked the absolute business and the entire band were insistent that we keep it.

In terms of sound, though, it is a bit of a mixed bag. Starting with the toms: utterly fantastic for the style of music (pop/ rock). As you may expect, the main characteristics were that of a low, punchy, loud and relatively fast nature. Tuned up a little, the rack tom had a surprising warmth to it whilst maintaining its fast attack and medium-to-short decay.

The floor toms just love being tuned down as low as they would go (which is low!), providing a gut-rumbling bottom-end yet with no sign of the troublesome lingering growls that are far too commonplace whilst tuning floor toms.

This mixture of a boosted low-end and the shorter amount of sustain that acrylic brings to the table is certainly a winning combination when it comes to these drums. It keeps unwanted overtones at bay and makes tuning the toms a doddle with little need for dampening.

The bass drum on the other hand is not quite as simple. With no internal dampening and an un-ported resonant head, the drum is rather tricky to get an agreeable sound out of.

Tuned low it is very boxy, yet with a little tweak of the drum key it develops a high pitched hum; completely bypassing the low, fat punch that we were expecting. We do however, have every faith that with a little more time and the right tools (ie: a pillow and a Stanley knife) there is no reason why the bass drum shouldn't sound every bit as huge as its neighbouring floor toms.

There is also the element of the supplied Chinese-made Remo UT heads which evidently cause no issue to the rest of the kit but don't do many favours for the poor bass drum.

The included 14"x51⁄2" snare drum is again troublesome to tune, as is the bonus 14"x8" snare drum. It is essentially impossible to get any kind of snap from the latter - which is perhaps to be expected considering the drum's outrageous depth.

It does however offer a very low, snare-heavy fat-back sound throughout its tuning range. This drum
is certainly a one-trick pony. The shallower snare is more agreeable but it is still a little pesky to tune.

The backbeat lacks definition and, much like the bass drum, sounds somewhat boxy. With the bottom head cranked up as far as we dare take it, it starts to produce the snap that we're looking for.

With the same treatment given to the batter head and the addition of a little dampening, suddenly out come heavy rimshots and defined ghost notes.

Just like the deeper snare drum, the generic 20-strand wires are leaping into action with every whisper of the drumhead. On a separate note, the throw-off on both snares is rather clunky and also very noisy. To give it credit, it does snap gratifyingly back into place but makes quite the racket in the process.

In summary then, Natal's Arcadia Acrylic is a great-looking kit that is sure to turn heads. Undoubtedly a good price for the kit in its entirety, although don't expect an amazing sound straight out of the box - you'll need to spend some time tuning this bad boy up before you're ready to hit the stage.