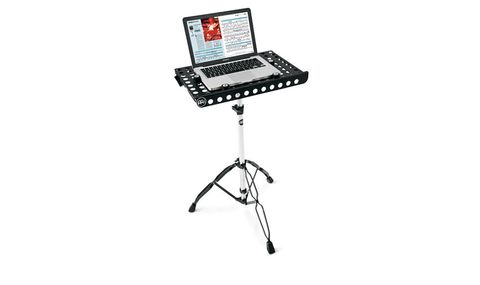 Meinl hasn't skimped on quality here, and that is reflected in its hefty price tag.

With more and more drummers integrating technology into their set-ups it should come as little surprise that a drum company has created its own hardware geared at this flourishing market. The Meinl Laptop Table is a sturdy stand on which to house your computer during a performance.

Never ones to do things by halves, Meinl has shown real attention to detail in the crafting of this stand. Made from perforated metal plate, out of the box the table feels like a quality piece of kit, and one that would stand up to the (inevitable) odd knock and bash while in situ. When fully extended, the stand comes in at 20"x121⁄2".

Having seen countless drummers recklessly position their laptop or tablet on the floor next to them during a performance (in a ridiculously unergonomic position and one that is seconds away from seeing the laptop drenched by a kicked pint), we have to give Meinl credit for spotting the gap and filling it.

That's the concept dealt with, now the product itself. When set up and put in position alongside the kit it certainly feels robust and up to the task, there's definitely no worries of it collapsing on you.

The main surface (the one that you'll lay your laptop down on) is a cracking piece of design in itself. The black metal surface filled with holes not only looks cool, but it'll also help keep your laptop cool, as the holes have been put in place to aid ventilation.

After testing the table out with an old Macbook prone to getting so warm you can cook your breakfast on it, we can say with confidence that the stand does an excellent job in this respect by allowing the excess heat to dissipate.

You'll also find four stoppers on top of the stand that can be moved around and fastened in to lock your laptop in place, avoiding any concerns that your precious piece of kit could slide around (or worse straight-up fall off) during a performance. Again, our experiences with the stand proved this to be the case, with our 15" Macbook firmly in place throughout our test.

So it does its intended job, and that's not quite all, as Meinl has also thought of a bunch of handy little features. You've got a cable feed to keep those pesky wires in one place and a holder for your headphones attached to the side. All good then, right?

Well, there is one sticking point, the stand will set you back £258. A premium price for a premium product, but also a pricepoint that may scare some punters off.