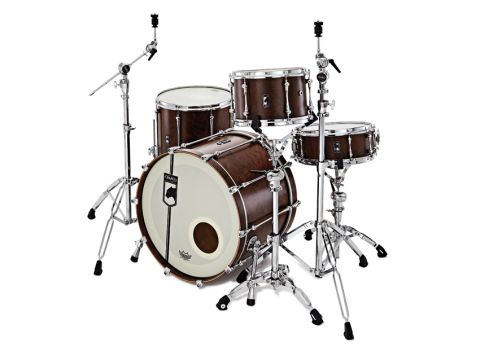 A kit that's thoroughly modern in construction but with a vintage appeal.

Back in 2010, Mapex revamped its popular Black Panther snare line with 14 all-new models in a wide variety of woods and metals.

As a follow-up Mapex decided to build limited edition Black Panther Collection drum kits based on just four of the snares. First we had the Blaster and the Velvetone, the latter winning Music Radar's Best Kit of the Year award for 2011.

Both Velvetone and Blaster are hybrids of maple and walnut, walnut being a wood that was used in vintage drums many decades ago. Now we have a third kit, the Retrosonic, which is 100 per cent North American Eastern Black Walnut, Juglans Nigra.

Mapex/Korg's Pete Havard says, "This is a project that everyone at Mapex is hugely excited about. It's been a pleasure discussing which of the 14 core Black Panther snares would work best as a full drumset and then working closely to devise the optimum features and sizes for the end-product."

As with the previous two Panther Collection kits, Mapex has carefully chosen sizes for the Retrosonic that suit the wood and the aim of the series. The result is a classic four-piece, 22"x16", 12"x8" and 16"x16", with a 14"x5½" snare. (Although a 14"x6" snare could be made to order if you really wanted one.)

If you're the sort who's turned on by exotic wood finishes then this is as mouth-watering as it gets. It's no accident that figured walnut is the traditional choice for the dashboards of luxury motors.

The review kit's outer veneers have obviously been chosen for their wow factor. Mapex describes the finish as semi-gloss but it is more a satin-matte, flawlessly smooth.

Such is the utter gorgeousness of the walnut, I think Mapex has made the right decision to avoid using an isolation mount and plonk the small tom on a (S1000) snare stand that is provided with the kit. Dimensions-wise those shells are all a relatively hefty 8.1mm thick and they have Mapex's so-called 1:9 bearing edges where there is a 45° slope right up to the outer edge with the narrowest of round-overs on the final outer ply.

Edges are smooth and level and the inner walnut just lightly sanded. We've had issues previously with occasional Mapex shells being right on the border of what is acceptable as 'round', but that seems to be in the past. These are all accurate to within a millimetre or so.

Hoops on the bass drum are also walnut, while the spurs and tom legs are as professional as you'd expect. The black and chrome Black Panther badge looks fab and the heavily chromed hardware is impressive.

Tube lugs and recessed bass claws are substantial and pleasingly sculpted, while Mapex's 2.3mm Sonic Saver triple-flanged hoops turn over and in towards the drum centre rather than outwards like most others. The contrast of florid, matte walnut with super-bright chrome makes this a most stylish kit.

The Retrosonic is a classic four-piece kit in almost classic sizes with just the bass drum being a couple of inches deeper than back in the '60s and '70s. Unlike vintage shells though, which tended to be thin with reinforcing rings, these shells are quite thick by today's standards and without re-rings.

In fact the earlier Blaster kit has thin shells with reinforcing rings, while the Velvetone has a similar-thickness straight-sided shell to the Retrosonic, but is a hybrid of walnut with the slightly brighter maple to give it a more contemporary edge.

So, we have 100 per cent walnut, which is universally accepted to have a dark timbre, balanced by thickish shells with 45° edges - not razor sharp but tightly rounded - which should add incisiveness, and Suede Ambassadors - which have a slightly softer, deeper tone than normal Coated Ambassadors.

What all of that didn't prepare us for was the experience of first playing the bass drum. Walnut is supposed to infuse a drum with a dusky flavour, but we were taken aback by the first prod on the bass drum pedal. Even with an impact pad, a port hole in the front head and no damping, the response was middly, almost soft. Not boomy but rounded.

Some of this you can put down to the jazzy medium-high tuned Suede Powerstroke-3 batter. Slackening off the batter soon had the click and thump returning, but it remained a tidy sound, subtly controlled and deep.

In the same vein the small tom arrived with its batter tuned way high, be-bop jazz style - which it suited well. It really pinged, but with the walnut shell and Suede head the sound was still warm.

As we tuned it down it opened up and started to speak more broadly until we reached what for us was the sweet spot - a medium tension where the head is not fighting the shell but joining forces with it to project its full, warm character.

The combination of 12"x8" with 16"x16" is a real classic. The floor tom came with a more standard, open tuning which revealed its considerable power and depth, the wide pitch difference between small and large toms making it easy to play musically and melodically.

As for the snare, we loved it straight away. The medium-thick shell with 45° edges ensures a lively, crackling response. It was brighter and crisper than we expected from the dark walnut image, in some ways more like a 5" than a 5½".

Perky and resonant near the edges, the deep walnut timbre asserts itself in the middle where your backbeat is fat but still crisp. The Sonic Saver triple-flanged hoops have a cushioning feel, which makes rim-shots a joy.

Flicking off the strainer, the long, drop-away lever at first got in the way of my left leg. Then, on the plus side, we found we could push it back up with a knee while still playing.

In the end we simply rotated the snare a bit further round and all was fine. Like all the other hardware, the piston style throw-off is superbly constructed and operates smoothly, and it can be tensioned from both ends, with click action 'micro-lock' for precise control.