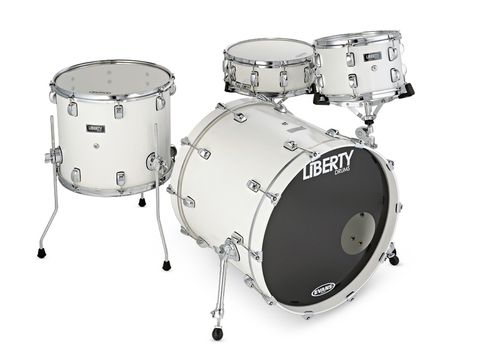 A well made and great sounding kit. With this attitude and calibre of product, Liberty Drums can only go from strength to strength.

Though officially founded in 2003, Liberty Drums have been being manufactured for well over a decade.

Based in Shildon, County Durham, the company is run by Andrew Street. The R Series kit on review is from the company's newest range.

Like many drum-builders, Andrew Street began playing drums as a youngster and today remains a committed player. His first steps toward becoming a manufacturer were taken when he began reconditioning old kits for his own use.

One thing led to another and experiments in shell building ensued, again just for personal use. However, musicians are nothing if not a fraternal bunch and friends began enquiring about his creations until eventually Liberty Drums was born.

Since launching the company Andrew has worked hard at developing Liberty as a brand, to the extent that he now has a small but enthusiastic roster of Liberty endorsees.

The 'R' in R Series stands for Recording, so it's clear these drums have been designed to excel in the studio.

For review we have a four-piece shell-pack made up of a 22x18-inch bass drum, 14x5½-inch snare, 12x8-inch tom and 16x14-inch floor tom. The price of the kit only includes the two toms and bass drum; for the rest of this year Liberty is offering the snare drum free to anyone ordering an R Series kit.

To produce a perfectly balanced recording kit Andrew has used two different woods in the kit's construction. So while the toms and snare are made from birch, the bass drum is 100 percent maple.

Thin shells have featured on a lot of Liberty drums to date (snares excepted) and the R Series continues in this vein with the tom and floor tom shells being 4.5mm thick while the bass drum is marginally broader at 6mm.

Though thin, the shells manage to pack a few layers of ply - a total of nine for the toms and 12 for the bass drum. The snare drum tops the ply count with 15 layers, which make its shell 7.5mm.

Other than the bass drum spurs and floor tom leg brackets, no mounting hardware is fitted to any of the drums, so the bass drum is undrilled and the rack tom doesn't even have a suspension mount, though one can be fitted on request.

The shells are beautiful examples of drum-making that have clearly been built by a capable and experienced craftsman. Bearing edges - cut sharply at 45° on the snare and toms and a little more rounded on the bass drum - are executed faultlessly across the drums.

Shell hardware and hoops are bought in rather than being produced in-house, but Andrew has chosen a distinctive rounded lug design that has been compared with the curves of VW Beetle. On the snare drum the lug is reproduced as a double-ended bridge lug.

Liberty offers a range of lacquer and stain finishes, either as a solid colour or with the grain showing through. The finish on the review kit is Piano White. Ostensibly a gloss finish, it has something of a semi-matt appearance since Andrew doesn't like to smother his shells in layer after layer of paint in order to get a hard, deep gloss finish. He is happy to do so for customers, but as this kit was made to his own specifications he finished it in his preferred manner.

This means that the contours and ripples of the wood are visible through the finish. While this might not be to everyone's taste it is a custom kit and so can be tailored to an individual's requirements.

The lacquer also coats the shells' interior - not so much for the sonic effect, which Andrew reckons is minimal, but more for visual aesthetics - and is deployed over the entire range. The colour or stain inside the shells mirrors that of the exterior, so if the kit was finished in canary yellow then the inside of the shells would be as well.

Unless requested to do otherwise, Liberty kits are supplied with Evans heads as standard. The bass drum is fitted with an EQ1 batter and ported ebony front head, which together with the thin maple shell virtually guarantees an open, warm response.

This was certainly the case and the drum produced a fabulously fat and punchy note. The presence of an Evans EQ muffler at the batter end kept things centred and encouraged swift decay.

Overall the drum was controlled but the note was a perfect blend of power and tonality - exactly what a sound engineer would be looking for.

The toms, shod with twin-ply G2 batters and G1 resonants, brought a switch of woods from the American maple of the bass drum to Finnish birch. With no damping they gave deep, almost pure notes which tapered seamlessly into a smooth decay.

Tuned down their response became quite dark and saturated, while turning the tension rods in the opposite direction revealed a more typical birch response, cutting through with ease. Wherever they were tuned, with such a great resonant sound it would have been tantamount to treason to apply any damping.

Also made from birch is the snare drum, which is fitted with an Evans ST Dry batter. It's an unbelievably sharp-sounding snare, especially considering the thick head which also contains a circle of overtone-eliminating perforations.

At lower tunings it sounded warmer rather than deeper. Anything from mid-tensions upwards is where it really took off, producing a funky whip-crack that almost seemed to part the air either side of it.

This powerband continued all the way up to ludicrously tight biscuit-tin tunings where eventually, if somewhat reluctantly, it began to choke. It's an irrepressible gem of a drum that completes a polished and versatile kit.

Andrew Street clearly knows how to make great drums. Not only that, he is also savvy in the art of branding and marketing his products. Build-wise and sound-wise it's hard to fault the kit - the shells are spot on and the sound it makes is nothing short of glorious.

Having spent time with the kit there are a couple of strictly cosmetic details that we would want tweaked if we were to buy the kit, but being a custom manufacturer Andrew is happy to work to any individual specification.