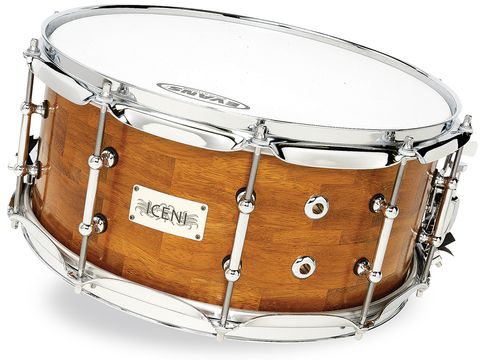 Iceni has so far built just a handful of solid wood snares, including a 14"x6 1/2" mahogany, 13"x7" bubinga, 13"x4 1/2" pine and 14"x6" walnut. Simon's not yet tried bending or ply construction, although his intention is to make kits in the next year. The competition is tough, but this Iroko snare stands in comparison with other hand-made drums - the minor criticisms are small beer.

Peterborough-based Simon Rist started making drums while at university three and a half years ago. He was studying architectural model-making and he's adapted some of those skills to the art of shell building.

Two years after leaving university, Simon makes his living from architectural modelling, but would like eventually to build drums full time.

This is only Iceni's fifth drum and it's block constructed 14"x6 1/2" in Iroko wood (aka African Teak from West Africa), often used for boat building and kitchen worktops etc.

"What we always look for first in a quality snare drum is edge sensitivity: can you play a buzz roll right up to the bearing edge? Well, you can tick that box..."

The shell is actually made from 100 segments, giving it a quilted look. The solid Iroko block is cut into long sections and then into trapezoid segments. These are glued together in circles, stacked up to shell height and turned into round on a lathe.

"It's the most aesthetic way I've found," says Simon. "I've tried staves, but I like the way with segments you get both end grain and long grain. It's like brickwork with joints overlapping so the shell is much stronger."

The effect is certainly striking and the thick 10mm shell has a luxuriously sturdy appearance. There were, though, one or two areas where the joins between the 'bricks' were not 100 percent sanded flat, leaving tiny ridges. They're barely visible, but run your finger over the surface and you can feel them. We're being really picky, though, as overall the finish is beautifully smooth, hand-waxed and polished.

Inside, the shell is a little more rough and unpolished, which is fine. The accurate bearing edges are routed to a double 45 degrees, 2mm to the outside and 8mm inside. All metal parts are generic, including chrome-plated, solid machined brass lugs and 2.3mm steel hoops. The strainer is by Gibraltar with Tama Starclassic snare wires. There are also two die-cast 10mm air vents.

What we always look for first in a quality snare drum is edge sensitivity: can you play a buzz roll right up to the bearing edge? Well, you can tick that box. What's more, all that edge brightness means you get wild, resonant rim shots and vibrant cross sticks.

Wood shells are usually described as warm, but we find also that a good, thick wood shell snare like this rings as much as a metal shell. The Iceni has all this in abundance.

The extremely shallow, subtle cut of the snare beds, together with the quality Tama snares, provides a rich, clean response with a minimum of sympathetic buzzing. The carefully cut bearing edges make tuning easy, though we did encounter a problem: having taken off the batter head, we had difficulty getting it back on. The bolts were only just long enough to reach the rather short tube lugs.