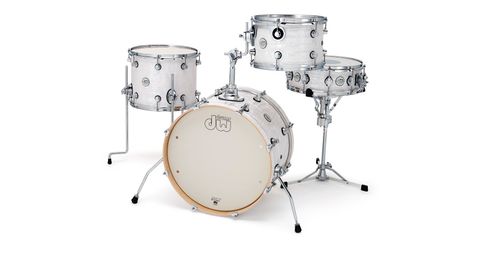 If the origins of the Frequent Flyer lie in acoustic settings, the finished product is more than capable of punching above its weight.

While both DW and Peter Erskine are no strangers to smaller set-ups (DW offers a Collector's Series Cocktail kit while Mr Erskine has recorded entire albums and presented drum clinics on such rigs) the layout and dimensions involved leaves them filed them under 'esoteric'.

Initial designs for the Frequent Flyer centred on building a kit small enough to be taken on short flights when packed down, but after wrestling with this for some time it was decided that the compromise in sound was too great.

According to DW's Scott Donnell, the brief was then widened to 'the most compact set we could design that still sounded like a full set of drums'.

The finished kit is made up of a 20"x12" bass drum, 14"x5" snare, 12"x8" rack tom and 14"x11" floor tom, making it a kind of modern take on Downbeat sizes (with just the nip and tuck on the bass drum and floor tom separating it from Ludwig's classic blueprint).

Though many hours were spent finalising the 20"x12" bass drum's depth it was, ironically, the size that Peter Erskine suggested from the outset. Meanwhile the 14"x11" floor tom is, in essence, a power-depth rack tom reconfigured with legs.

As with all Design Series drums, the shells are 100 percent North American maple; toms and bass drums are 8-ply while the snare drum is 10-ply. DW has as many different shell lay-ups as there are wood combinations out there and the Design Series features HVLT (Horizontal/Vertical Low Timbre) shells, which are only found elsewhere on Collector's Series cherry drums.

DW reckons that this combination (a 5:3 ratio of vertical to horizontal plies) furnishes the shells with a balanced blend of bite and bottom end. The vertical plies are similarly dominant in the snare's construction.

Across the Design Series individual plies are fractionally thicker than regular DW drums at 1/32" instead of 1/36"; this tiny difference adds up over the course of a shell and the resulting drums feel reassuringly solid.

Owing to DW's preferred Imperial measurements, shell thicknesses translate roughly as 6.32mm for the toms and bass drum and 7.9mm for the snare. Bearing edges are cut at DW's customary 45° with a small backcut. We detected a sharper peak on the snare drum's edges in comparison with a gentler rounding over on the other drums.

Two finishes are available; a Tobacco Burst gloss lacquer and the White Onyx wrap of the review kit. Being UV-cured, the lacquer finish has a dramatically reduced carbon footprint, making it more environmentally friendly while the FinishPly wrap is of the same quality as DW's high-end wraps.

DW's Mini Turret lugs - a shrunken version of the company's distinctive rounded lug - are fitted in ideal proportions across the drums. Despite their minimal footprint, each lug is attached to the shell by two bolts.

The rack tom hangs from a new - and exclusive to the Frequent Flyer - bass drum-mounted post. An L-shaped arm clamps into a ratchet assembly, offering two dimensions of adjustment. Compared with the universal movement that a ball and socket joint provides it takes a bit of getting used to, but it enables an equal spread of positioning and holds firm.

A DW STM suspension mount is fitted to the tom as standard. Retro-style swing-out bass drum spurs save both weight and cost while the all-aluminium floor tom legs (from DW's Jazz Series) trim a few further pounds.

DW's finely-threaded True-Pitch tuning rods are found on all of the drums, and the snare and toms have 2.3mm triple-flanged hoops while matching wood hoops complete the bass drum.

Peter Erskine describes the Frequent Flyer as a 'second or even third kit' which suggests that he sees it as primarily, if not exclusively, a gigging kit. Less ambiguous is the fact that in the official video on the DW website he has clearly swapped the supplied heads for his preferred choices.

The fitted heads are both genuine USA Remo (as in the bass drum heads) and Taiwanese Remo that have been made from American-manufactured Mylar (the rest of the drums) and are of excellent quality.

At 20"x12", the bass drum is probably the defining component of the kit. DW felt that it was crucial to incorporate as big a diameter as possible and let the portability come from a reduced depth.

Such a shallow drum can be played wide open and, tuned up, easily produces the springy, almost melodic 'bonk' that says 'jazz' in any language. Releasing the tension and introducing the most judicious of dampening (a pillow is supplied) finds the note growing into a deeper and more concentrated thump.

The short distance between the heads means that the response is both immediate and carries with it a hard edge that opens up the possibilities of many more musical settings. While it doesn't move as much air as, say, a 22"x18" kick (how could it?) it does carry convincingly; we played the kit in a high volume rehearsal that took place in a crowded studio and the bass drum remained audible amidst the cacophony.

The two toms both share relatively short depths as well but are nowhere near as condensed as the kick. At 12" and 14" in diameter they offer a useful range of tuning options. A characteristically jazzy 'ping' is possible at high tensions, with the clean projection ensuring that notes almost leap forth.

Bringing the tuning back down to the sweet spot, the toms' response is wider and warmer but no less punchy, or instant. They are at their most uninhibited when wearing the supplied clear single-ply heads; here they jab through the mix with surprising muscularity.

Replacing these for coated alternatives rolls off some of the attack and allows more of the wood to shine through in each note. The snare is a quality instrument that is good enough to be marketed on its own, a highly responsive drum that can cope with a wide range of dynamics, from super soft to 'Way Too Loud', and really gets into its stride from mid-tunings upwards. Like the rest of the kit, it is worthy of its DW badge.