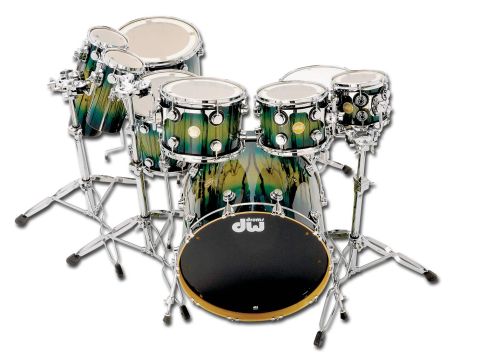 Leaving aside the snare and Rata drums, this kit represents a giant step forward in drum manufacture. Over the years DW has become a brand synonymous with innovation and the X Shell technology is a radical piece of drum making. More importantly, it works, delivering results that really justify the hype.

Drum Workshop began life as a hardware company (a fact reflected in its class-leading stands and pedals) and expanded into drum manufacture in the late 1980s. Since then it's progressively strengthened the brand, earning a reputation for constantly evolving designs. DW's newest drums - dubbed X Shells - represent a departure from the accepted norms of drum construction. The clue's in the name people…

If you're familiar with existing DW drums you may well recognise the acronym VLT. It stands for Vertical Low Timbre and describes a manufacturing process by which the outer and inner plies of a drum run vertically. Drums have to be cross-laminated for strength - at 90° to one another - but keeping the outer and inner plies vertical places less stress on a shell, giving it a lower fundamental tone.

In theory, a shell made up of exclusively vertical plies would possess enormous amounts of bottom-end. In reality, such a shell would not be strong enough to be fitted with heads.

John Good at DW's solution to this conundrum was the X Shells. He proposed that a shell made with plies laid diagonally at 45° to the vertical axis of the shell - still cross-laminated at 90° to each other - would give the closest results to a fully vertical shell. According to DW, Good's first attempt at creating an X Shell was spot on and the X Shell option now forms part of the Collector's Series range.

DW reckons the diagonal cross-laminating technique will work its magic with any wood; the review kit is made from maple. X Shells don't cost any more than other equivalent Collector's Series drums and can be ordered in any Collector's size, finish or hardware option. A typical five-piece kit will take between eight to 12 weeks to turn around.

X Shells are eight plies thick for all toms and bass drums, while snares come in at 10 plies. In addition, toms and bass drums also feature three-ply reinforcement rings (optional on snares). These are beautifully made, with the innermost plies being fashioned from the sort of superior cut of wood that's normally reserved for a final exterior ply.

Interestingly, the grain on the reinforcement rings runs vertically, so DW could be looking to induce a subtle VLT effect as a bonus.

Peering inside each drum at the main shell visible between the two sets of reinforcement rings, the diagonal pattern of grain registers immediately, as it's such an unusual sight. The bearing edges are DW's standard 45° cut. The kit supplied for review consists of X Shell drums with three exceptions: the snare drum is a standard Collector's Series model with VLT plies, while a pair of Octoban-like Rata drums have also been included.

The Rata drums are another new DW product, also launched at NAMM and like Octobans they're available in one diameter (6") with eight lengths (4" to 18" in two-inch increments).

Also making its UK debut with this kit (but by no means limited to X Shell drums) is DW's 23" diameter bass drum, which has been developed from an idea originally floated by DW endorsee Neil Peart. Remo has been commissioned by DW to make 23" bass drum heads and is presently the only head manufacturer supplying them. All 23" bass drums are shipped with a spare batter head, as the likelihood of finding one in your local drum shop at five o'clock on a Saturday afternoon is pretty remote…

For obvious reasons the 23"x18" bass drum was the first drum out of the box. It's an unusual drum to sit behind, as it has the apparent physical presence of a 24" kick, but being an inch smaller can accommodate rack toms above it that little bit lower. The kick is fitted with a DW pillow that's narrow in the centre and T-shaped at both ends where it meets the heads.

In use, the drum delivered a thunderously low note, but one with definition. It wasn't so bassy that the note could be felt more than heard; it combined the punch of a 22" kick with the stage-shaking capabilities of a larger drum. The supplied pillow undoubtedly helped keep it under control, so we tried removing it. Without any dampening, things got understandably boomy, but a felt strip across the front head calmed down the ringing, leaving a wide open-sounding and distinctly Bonhamesque drum.

The five toms came next (8"x7", 10"x8", 12"x9" racks and 14"x12" and 16"x14" floor toms) and carried on where the kick left off. The claim about the X Shell technique producing lower sounding drums really did ring true. At average tensions each of the drums sounded a couple of inches bigger than they were. They weren't just deep, they were magnificently rounded and sonorous.

Because the heads didn't need slackening off to achieve the extra bottom end, they didn't sound flappy or dead - just loud, rich and addictively powerful. The floor toms particularly excelled and were almost timpani-like in their enthusiasm. We likened the sound of the toms to those of Keith Moon's on Live At Leeds, which is a suitably apt and graphic comparison.

The snare was always going to struggle to impress next to such dynamic partners and though it was a highly versatile drum, it didn't mesmerise me like the toms did. The VLT plies on the snare meant that thick, woody crack was easily attainable, while cranking up the head produced an excellent sharp retort. It's a shame that an X Shell snare didn't come out with the kit, as it would've been interesting to see how one sat with the toms.

The Rata drums were all about piercing attack, giving a bright note that bristled with metallic overtones. They were a little like a cross between a Roto Tom and a timbale. As add-ons they were diverting, offering an unusual and penetrating sound. At over half a grand apiece though, they can't really be described as affordable.