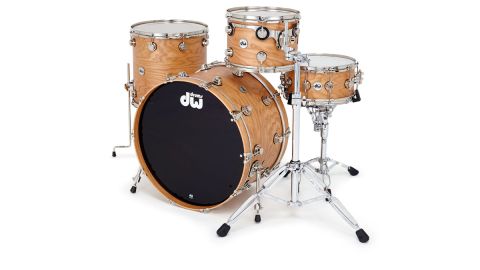 This is the cherry on the cake of drum craftsmanship with extraordinary attention to detail. At a price...

DW's Collectors Series has long been one of the top kits in the world, and this new pure cherry wood version is proving a big hit.

Launched in 2014, the Collectors Cherry has received "overwhelming support from our top artists. It's more than an alternative to maple, it's their favourite new kit". So says DW's Scott Donnell. "It's on dozens of major tours this summer and we're seeing the same elation from DW fans around the world."

Although it is not unheard of in drum construction, it's rare to see an entire kit made from 100 percent cherry wood. The shells are crafted in DW's Oxnard, California, Custom Shop and cherry was previously reserved for exotic face veneers only.

DW's shell-making process involves 'baking' the shell under pressure then immediately placing it in a pressurised cooler to "ensure that the glue instantly crystallises and the shell hardens to a perfect cylinder".

There are eight plies, each 1/36" thick, making up a thin but strong, roughly 1⁄4" straight-sided shell. The actual lay-up is five vertical (short) plies and three horizontal (long) plies in the following configuration from the outside in: HV, VHV, VHV. So the inner ply is laid vertically but the outer ply is horizontal, in the classic manner.

Cherry is a beautiful wood with an irregular swirling grain in honey coloured light brown. But what really knocked us out was the sheer quality of the finish. Described as Hard Satin Matte Lacquer it's a natural cherry, and 'smooth' does not tell half the tale. It's perhaps the most flawless finish we've ever passed a hand over. DW is famous for its vast choice of Custom Shop finishes, but any other would surely be sacrilege.

Inside there's a bit of a nap left on the vertical grain veneer. Each interior also has a paper quality label certificate bearing its order number and Timbre Matched note: C# (13"), F# (16"), E (24") and B (snare).

Outside we have the distinctive turret lugs set on rubber gaskets and DW's discreet STM (Suspension Tom Mount) which is also isolated by big soft rubber rings. The STM's low profile steel band detracts minimally from the drum's appearance.

Talking of metal work, DW offers hardware in chrome, nickel, gold, satin chrome or black nickel. Our kit has the new nickel plate, although we confess we assumed it was chrome until reading the boxes. It was then we realised the nickel is warmer in hue than chrome and is a subtle classy accompaniment to the cherry wood.

DW offers several alternative floor tom legs in the guise of short or long legs in steel or aluminium. Our 16" tom has standard steel 21" legs (the alternative is 25"), which are plenty long enough and seriously heavy duty.

The tom hoops are also different in that, although triple-flanged, they are thick 2.3mm and the top lip is bent right over making them flatter, more comfortable and stable. They are also engraved with the legend 'DW True Hoop'.

Along with the hefty bass drum spurs, generally meaty hardware and weighty cherry wood, this is one heavy kit, but one which feels solid, reliable and special.

The raison d'être of the VLT (vertical low timbre) ply lay-up is that five of the eight cross plies are set vertically, including the crucial inner one.

This helps to project a lower fundamental. Vertical inner plies are nothing new, but make sense as there is less tension and the air column is aided in zooming up and down the shell.

The True Pitch stainless steel tension rods have 30 percent more threads, finer than the industry standard. As a result it took ages just to remove the six-lug hoop from the small tom, though the extra-fine thread means you can be more fussy with your tuning and the tension somehow feels more secure.

Also on the plus side, the design of the STM means that having unscrewed the rods the hoop lifts off without having to uncouple the mounting bracket (a downer on some other designs).

The STM bracket is simply wrapped around four turret lugs and is separate from the tension rods themselves. On to those shell sizes. You'll be bored with me crowing on about 14"-deep bass drums, but once again here's evidence they are coming back big-time.

The 24"x14" bass drum was a 1970s rock favourite, adopted from the swinging big bands and Buddy Rich. After years of 22"x18"s, no sooner do you wack this beast than you realise it's the size you need for that firm and fast, slamming Rich-Bonham type of sound.

Irrespective of the narrow bass drum, our first impression of the cherry wood was of quite a hard-edged flavour. With the classic-sized 13"x9" and 16"x16" toms the attack is focused and mean.

Underneath the timbre is warm and quite dark, less so than, say, the Bubinga that has become popular lately, but also less bright and open than maple. We were happiest with the tuning from medium to low which emphasises the cherry punch while allowing the full tone to develop.

Thoughtful innovation comes into play again with the snare. DW's latest Mag Throw-Off is a splendid multi-tasking design. The strainer is a chunky radial bracket which is magnetic so that it stays up.

Previous such designs have had a habit of dropping away under hard playing. It also incorporates a neat horizontal tension knob. On the butt end there is a 3P Three Position lever. Again this has been tried before, but locating it on the butt instead of trying to integrate it on the throw-off side is smart.

The comfy lever increases or decreases the snare tension effectively, giving you practical flexibility. This is no gimmick, it is solidly engineered and works. The drum itself is like the rest of the kit with an edge to it, a focused birch-like crack, but with a warmth which is always woody toned whether tuned high or low.

DW's heads are specially modified Remos. The batter is basically a Powerstroke-3, but the internal damping flap is marginally narrower. Mind you, this makes not the slightest difference here as the drum also comes kitted out with twin damping pillows. These effectively stifle half the resonance, the result being a great dry crack of shudderingly deep and shocking proportions.

But this amount of damping rather defeats the purpose, so we remove the pillows and tried a medium, open tuning. Now you can hear the full tone of the shell and the mighty presence of the drum. The speed of the narrow drum combined with the clear edginess of the cherry brings out a full, rich but direct tone.