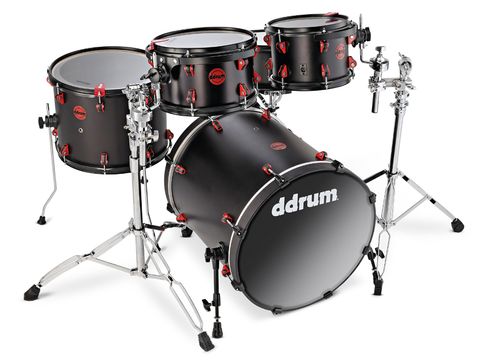 The Hybrid is a very tidy solution to offering acoustic and electronic options in one package. Whether it's an answer to a question that no one's asked is arguable - ddrum might almost be a victim of its own success with the ease-of-use of its retro-fit triggers in this case.

Given that the ddrum logo has appeared on acoustic drum kits for five years and on first-class triggers and electronics for a lot longer, the chances of the brand pulling the two elements together were always high.

With the launch of the Hybrid kit, ddrum has built its triggers into a shell-pack to deliver a one-stop solution to the issue of combining acoustic and electronically-derived sounds.

Perhaps surprisingly, ddrum has chosen to implement this crossover with an affordable shell-pack built around Chinese-made Poplar shells, rather than one of its high-end kits. Then again, ddrum has always focussed on the metal-loving drum community, many of whom are young and lacking the cash to invest in a trigger-able Dios Exotic.

The Hybrid is available in either five- or six-piece configurations. Both include 20"x20" bass drum, 13"x6" snare, 10"x7" and 12"x7" toms and 16"x12" floor tom - the six-piece kit also ships with a 14"x12" floor. Kick and snare have eight-ply shells while toms are six-ply and all are finished in a cool satin black with remarkably funky red lugs.

The big news is the triggers, which are essentially the same as ddrum's Acoustic series in function. Neatly mounted internally, the triggers feed XLR outputs set into the shells, providing a discreet way of electrifying the kit.

Each trigger has a red steel 'guard' to prevent a direct hit, and at first glance these look like standard mounted triggers. All electronics are set within the drums.

In terms of construction, the Hybrid is all very tidy, so it goes together very well and there's a noticeably 'sorted' feeling from the rig once you're sat behind the assembled kit. Tuning is relatively pain-free, with just the odd sticky tuning rod needing to be coaxed into co-operation.

The Hybrid is supplied with Mylar heads with internal damping rings for toms and kick batters, and this has a very noticeable effect on tone. The overall impression is of a very focussed, dry response with quite a pronounced mid-range and little ring.

This might suit you perfectly, of course, but it's certainly quite a 'specific' sound straight from the box - we would probably swap the supplied heads for something with a little more natural zing fairly quickly. It's always easy to damp livelier heads to suit, of course.

The shallow sizes of the toms not only look pretty funky, but they're very much 'of the moment' in that they respond quickly - a good choice for ambitious metal fills for example.

The snare is also a crisp performer, sharing some of the dryness and focus of the toms, but with enough body (thanks to the 6" depth) to deliver a solid backbeat.

Bearing in mind ddrum's pre-eminence in the trigger market, there's little to worry about with the electronics. Having said that, all triggers on the kit are single zone, where some may have hoped for a dual-zone head/ rim trigger on snare.

The question that begs to be asked is whether the Hybrid - with its built-in units for convenience - is preferable to a standard acoustic kit with triggers added post-purchase. Given that a set of ddrum's own Pro Acoustic triggers retails for under £200 and is an easy, and proven, method of combining acoustic and electronic sounds, it's a toss up.

There's certainly no need to junk your current acoustic set-up, just add triggers and you're away. But if the Hybrid does it for you in terms of its distinctive look and sound, there's nothing else like it on the market.