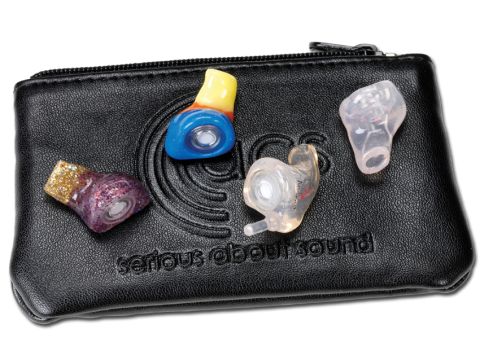 If you can afford them, there's no better way for a musician to protect their hearing.

The drumming community is rife with sad tales of the casualties of excessive volume. Hearing protection is essential to avoid a lifetime sentence of tinnitus and/or progressive deafness, but you probably already know that earplugs can severely compromise your performance.

With standard 'plugs, high frequencies are reduced more than lows and mids, and the overall volume reduction is drastic. Music sounds unnatural and distant, and the temptation to just remove the damned things becomes too overwhelming.

The ACS ER Custom Hearing Protectors offer a high-fidelity alternative, promising relatively flat attenuation across the frequency range, so the music sounds just as it should - just a lot quieter.

Each set of ERs is custom-fitted by ACS from impressions taken of the user's ear canals. From these, soft silicon ear moulds are constructed - inside each of these sits an interchangeable filter 'button'. Moulds and filters work in conjunction to produce the flat attenuation, using a patented design based upon some fairly weighty acoustics principles.

Each component is meticulously lab-tested and tuned to ensure the earplugs are functioning correctly and meet European standards. The filters, manufactured by Etymotic Research in the US, are available with 9, 15 or 25dB of attenuation - 15dB is adequate for most musicians, but if you're a particularly hard hitter or have a blaring brass section next to you, the 25dB set is recommended.

Inserting the plugs correctly takes a bit of practice, but once I got the hang of it I took my ER25s straight into the fire, to a typically noisy band rehearsal.

All of the instruments - drums, percussion, bass, guitar, keyboards and vocals - sounded clear and balanced, and I could still take part in between-song discussions.

The aural excitement factor of the music wasn't diminished, as it has been when I've used foam earplugs, the higher frequencies still sparkled, and the lows still kicked. The only thing missing was the pain - I was even immune to a rogue blast from the guitar rig that made everyone else in the room wince visibly. The customised fit is so comfortable that I didn't even bother to remove the ERs when we stopped for breaks.

I've subsequently got into the habit of taking them everywhere. I've used them on recording sessions, where wearing them underneath the studio cans means I don't have to worry about any accidental bursts aggravating my pre-existing tinnitus.

In noisy pubs/clubs they aid in hearing conversation, and I wouldn't even consider being in the audience at a gig without them.

While £165 might seem pricey for a set of earplugs, you'd be wise to think of these as a sound investment that will protect your most precious asset - your hearing - without interfering with your performance or enjoyment of music.

Pros including Mark Mondesir, Paul Elliott and Babyshambles' Adam Ficek swear by their ACS ERs, and once you've tried them, you will too. An essential bit of kit for every musician.