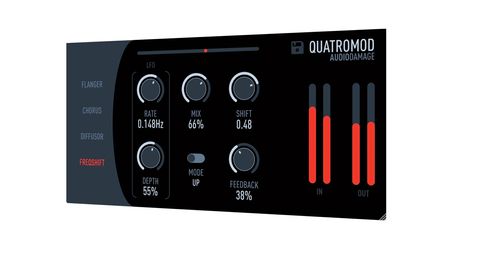 Four lively, versatile and sonically superlative modulation effects in one affordable plugin - what’s not to love?

The latest in its catalogue-wide revamp, QuatroMod (VST/AU/AAX/iOS) combines Audio Damage’s erstwhile Liquid, Fluid and Vapor effects, plus a software ‘port’ of one of their Eurorack modules, in a single plugin.

Released in 2008, the aforementioned watery trio were released simultaneously as a family of modulation processors - indeed, in our review of them, where they collectively scored 4.5, our only real criticism was that they needed a “unifying modular interface”.

Now we have exactly that, plus the inclusion of a fourth module to further sweeten the deal. So, Liquid, Fluid and Vapor are now Flanger, Chorus and Diffusion, emulating analogue through-zero tape flanging, chorus and what’s described as “the diffusion block from a reverb, rewired to act as a chorus”.

The new addition to the stable, Freqshift, is discussed in Freq out below. As far as we can tell, the only thing that’s been added to any of the pre-existing devices is the Chorus Mode switch, supplementing the regular Fluid chorus algorithm with the (Roland) Dimension D algorithm from AD’s Dimensions Eurorack module, itself a physical realisation of the original Fluid.

Other than that, each of the four modules is essentially identical to its predecessor, although under-the-hood changes have been made in terms of engine efficiency and future-proofing. Of course, they’ve all been redecorated in AD’s sleek new GUI styling, too, which has the added benefit of being freely resizable.

Switching between the four effects in QuatroMod is done using the text buttons on the left. While they’re completely modal - ie, you can only run one at a time, rather than stacking them up in series - the LFO Depth and dry/wet Mix controls (the latter not appearing in Flanger) stay put when flipping between them. This is a useful feature, enabling the general weight of processing to be kept consistent while auditioning each effect.

The lack of the obvious LFO Rate ‘lock’, incidentally, is due to the huge difference in range between modules for that particular parameter. Also common to all four effects are the Cylon-esque LFO monitor at the top, the input and output level meters on the right, and the preset menu, loaded with 24 factory patches. All four modules are extremely easy to use and sound every bit as rich, vibey and characterful as they did nine years ago.

A souped-up emulation of AD’s Eurorack module of the same name, Freqshift adds or subtracts frequencies to/from the source signal in order to create spectral modulation and pseudo-pitching effects.

The Shift knob lowers the signal by 1kHz when fully anticlockwise and raises it by 6kHz fully clockwise, but switching to bi-directional mode flips the right channel so that it shifts down as the left shifts up and vice versa - stereo fun aplenty.

Routing the output back to the input with the Feedback knob results in all manner of mental internal modulations, while the LFO sweeps the shift up and down at anywhere from 0.010-1Hz - evidently, it’s meant for slow timbral shifts rather than full-tilt oscillation.

Diffusion remains the most interesting of the original three, marrying reverb and chorus in a sparkly, smeary sort of effect that brings sheen and movement via the modulation of a bank of filtered delays; but Flanger and Chorus are both unquestionably lovely.

Freqshift, meanwhile, slots in alongside the others effortlessly, offering a delicious new flavour of modulation with bags of creative potential. The only thing we found ourselves wanting was LFO host sync for Flanger and possibly Freqshift.

For owners of Liquid, Fluid and/or Vapor, the $10 upgrade to QuatroMod should be a given - Freqshift alone is well worth the price, never mind the new unified UI and Dimension D Chorus mode. And for those who missed them the first time round, QuatroMod is a must-have modulation toolbox of relevance to all production styles, from the guitar-based to the electronic.