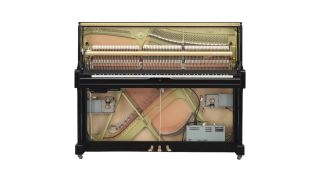 Yamaha has long been at the forefront of incorporating digital elements into acoustic pianos and vice-versa. Upright and grand models have been fitted with sample-based engines that provide additional piano and non-piano sounds, and MIDI has allowed for highly pianistic and musical control of external sound sources.

In the other direction, instruments like the GranTouch series married bona fide grand piano actions to all-digital sound engines, with the more recent AvantGrand pianos adding multi-channel sound, careful speaker placement, and cabinet design in the service of realism.

Yamaha now makes their latest statement of this hybrid philosophy with the TransAcoustic line: real acoustic pianos with supplemental digital sound engines that—here’s the kicker—use the piano soundboard itself, not conventional speakers, as the amplification system. It’s an intriguing proof of concept and hugely engaging to play, but do the practical benefits add up to more than that? Let’s investigate.

Yamaha sent a U1TA for review, a piano that begins life as their 48-inch tall U1 upright—an instrument so widely used that the “U” should stand for “ubiquitous.” There’s also a TransAcoustic baby grand, the GC1TA, which measures in at five feet, three inches and a $31,099 list price. Of course, the keyboard is MIDI’ed with optical sensors, which drive the digital sound engine—or an external synth of your choosing, thanks to the inclusion of five-pin MIDI in and out ports. The interface to all things digital is a black panel that resides discreetly under the bass end of the keyboard and provides 19 sounds ranging from Yamaha CFX concert grand to electric pianos to harpsichord, mallets, strings, and pipe organs.

Now for what makes it “TransAcoustic.” The digital sound engine drives two transducers—located on either side, as shown in the main photo above—that convey vibrations to the wooden soundboard. This idea isn’t new in itself; “vibration speaker” is the generic term and piano builders have experimented with it before (though not always in products that made it to market). The trouble is, physically mounting a speaker onto a soundboard is the last thing you want to do, as it dampens the soundboard’s vibration and can lead to damage if the wood contracts or expands over time. The traditional other option is pointing a speaker that’s mounted on something else at the soundboard. No matter how close it is, you still lose energy in the air between transducer and soundboard, and things won’t sound right.

Yamaha’s solution is basically to split the difference. Only the voice coil—the little wire-wrapped cylinder from which the rest of a conventional speaker funnels out—is mounted on the soundboard itself. The coil is so lightweight that it doesn’t cause any dampening issues. The magnet and other heavy bits are mounted on the surrounding bracing, such that the voice coil can surround the magnet without actually touching it. When the speaker is energized, the voice coil’s movements vibrate the soundboard without weighing it down. In effect, the soundboard plays the role of “speaker cone.” The image at left shows a closeup of the whole assembly.

What does this sound like in practice? Incredibly convincing. With every other type of acoustic-piano-plus-digital layering I’ve experimented with, I could never quite get away from the sense that the digitally-generated sounds were coming from point-sources different from the piano itself—even if the speakers were cleverly integrated into the piano’s cabinetry. With the U1TA, sampled grand, electric pianos, strings, and other sounds “bloom” from within the piano and benefit from its natural reverb in the exact same way as the piano’s own strings. Even if I disengaged the acoustic side using the mechanical “silent piano” feature (more on this shortly) and listened to just the digital sounds, I was hard pressed to localize their origin to where those transducers actually sit; all the sound was just wonderfully there. I’d even mike the U1TA for recording a layer of piano and another sound where I wanted everything to seem like it’s coming from the same acoustic space. Because it is.

Feature-wise, the U1TA’s digital sound engine is akin to a fairly basic digital slab piano, albeit with the stunning multisample of Yamaha’s CFX concert grand I first encountered in the NU1 taking center stage. Sparkly DX7-style electric piano, Rhodes, and Wurly are covered accurately and are fun to play, though the latter two could have a bit more attitude. Four pipe organs provide registrations from sparse to full, and all sound lovely given a combination of the onboard reverb and the piano’s natural acoustics. The “Jazz Organ” patch is standard ROMpler fare, but with the nice perk of the soft pedal toggling the speed of a surprisingly good Leslie simulation. The soft pedal also toggles chorus on electric pianos and vibrato on the vibraphone. The final three programs layer the CFX sample with strings, synth pad, and DX7 electric piano, letting you cover David Foster-style ballad layers with aplomb.

A simple MIDI song recorder includes a metronome that you can adapt to any time signature, as well as song storage/playback via a connected USB drive. Note that the U1TA is not a Disklavier piano, so MIDI songs will play only the digital sounds as opposed to triggering the real piano action.

Of course, it’s important that the acoustic and digital sides be in tune with one another. Strings, pads, organs, and the like sound different enough from piano that your ear forgives small tuning discrepancies, but these become more obvious if layering the acoustic piano with the CFX grand sample. Your UT1A’s acoustic half is the domain of a professional tuner, but a couple of parameters help you bring the digital side in line. There’s overall fine-tuning, then you can select from three stretch tuning curves: upright, baby grand, and concert grand. Stretch tuning is the practice of tuning notes slightly lower or higher than their “correct” values as you progress towards the respective extremes of the keyboard. In general, larger pianos require less stretch, but that’s one variable among many—this is a subtle art.

For that reason, here’s a strategy for maximizing your enjoyment of a TransAcoustic piano. When you take delivery, audition the CFX sample—whose source piano was doubtlessly tuned to perfection for the sampling sessions—with the acoustic piano in silent mode. Pick the stretch curve that’s most pleasing to your ears and then have your professional tuner use that as the reference for tuning the acoustic side.

Speaking of tuning, not only can the U1TA pass along external audio (from a 1/8" stereo input) to the soundboard, but it can fine-tune that audio up to a half-step in either direction. Do tracks you’d like to play along with from your iPod sound a bit sharp or flat relative to the piano? Not a problem.

Like the AvantGrand and NU1 before it, the U1TA occupied a corner of my living room over the holiday season, entertaining friends and family and serving as my practice machine when I didn’t want to boot up the full studio. (If you make most of your music in a technology cave, I highly recommend having a self-contained “social instrument” you can play outside of it.)

In acoustic-only playing, the U1TA sounds rich across the entire range and has very good bass for its size, but of course, can’t deliver the lows of a good baby grand. (The taller Yamaha U3 upright is as bassy as many baby grands I’ve played and in fact better than some, so I hope Yamaha offers a TransAcoustic version of it in the future.) That’s why it’s very satisfying to be able to layer in some of the deep, buttery bass of the CFX concert grand sample. In fact, when I wanted to play with a sense of full dynamic range but an unyielding volume ceiling, I preferred playing the CFX sample by itself.

Which brings us to the “silent piano” mode. Press the middle pedal and slide it to the left, and the hammers decouple from the strings, letting you play just the digital sounds, either off the soundboard or through headphones via one of two 1/8" stereo mini jacks. (These and a 1/8" line-level aux output comprise the U1TA’s audio outs. I’d like to see 1/4" outs like on the comparatively modest NU1.) Your key strikes still move the hammers—they’re just not quite hitting the strings—so all the weight, escapement, and other tactile feedback of the piano action is retained. Of course, you lose the sostenuto pedal in trade (though it should be noted that the standard, acoustic-only U1 lacks true sostenuto as well). On Yamaha grands (TransAcoustic and otherwise) that have the silent option, it engages via a lever that pulls out like a classic car’s parking brake, leaving the middle pedal free for true sostenuto.

In terms of loudness, the acoustic U1 is a formidably room-filling piano, and if the U1TA experience suffers from anything, it’s that even with the volume of the digital section at maximum, some sounds just can’t compete with the hammers and strings when used in layers. Choosing the easiest velocity response (there are five settings plus a fixed option) evened the playing field somewhat, and sounds that had more high-frequency content than piano at a given note (pipe organs and the string ensemble, for example) fared better overall. But with an acoustic piano-plus-Rhodes layer I wanted to play on Steely Dan tunes like “Gaucho” and “Glamour Profession,” the Rhodes sound struggled to keep up no matter how I tried to finesse the velocity of my key strikes. On the other hand, the “Synth Pad” program (number 16) added lovely body to the acoustic piano in spite of having a fairly muted frequency spectrum—playing this combo on Spandau Ballet’s “True” made me downright misty-eyed.

TransAcoustic sound reproduction is a true technological milestone in a keyboard industry too often dominated by marketing buzzwords. This isn’t one of them—the success with which the U1TA and its bigger brother the GC1TA “acoustify” digitally-sourced sounds is an honest-to-goodness Big Deal. That said, the U1TA seems targeted at a rather specific customer. Who’s that? First and foremost, you have your reasons for insisting on a real acoustic piano. (If that’s all you need, a standard U1 lists for $6,000 less and well-maintained specimens can be had for under $5,000 altogether.) You also want the benefits of a digital piano: tuning stability, quiet practice, MIDI recorder, extra sounds, and so on. (If that’s all you need, consider an NU1 at a fraction of the price.) You want to be able to combine acoustic and digital personalities on demand, without worrying about an external sound system and without any audible seams. At the same time, either personality has to get out of your way in an instant if you so choose. If all of the above has you nodding your head in agreement, there’s no question that a Yamaha TransAcoustic piano will serve, inspire, and delight you in a way that nothing else currently made can.

Bottom line: If you need this, you know who you are, and nothing else will do.