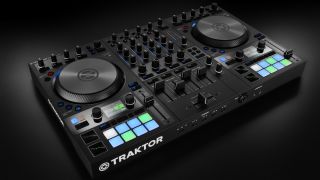 NI’s DJ mixing application, Traktor Pro, is set to be updated to version 3, bringing new versions of the S2 and S4 controllers along for the ride.

The software is more of a refinement than a significant overhaul. It now has a flatter and more modern interface design that feels a little cleaner than previous versions. Under the hood it benefits from Elastique 3 timestretching, and NI promises improved sound and stability.

The controllers, meanwhile, have both been redesigned to suit the new look of the software. Both controllers gain updated pads, along with a new Mixer FX section for quickly manipulating the software. The S2 has enlarged jog wheels, which NI claims offer improved sensitivity.

Of most interest, though, are the new ‘Haptic Drive’ jogwheels that are added to the S4. These are high-torque motorised platters which offer a high level of tactile responsiveness for beat matching, adjusting beat grids and scrolling through tracks.

It’s difficult to explain exactly what these are like in use, but suffice to say we’ve had our hands on them and the technology seems really impressive.

Get the full lowdown on the Native Instruments website.