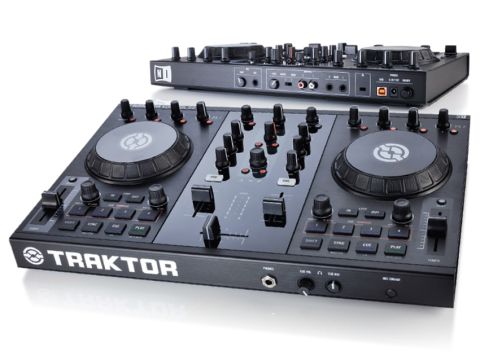 Stripped-back but much more immediate - not as flexible as the S4, but there's still a lot to love.

When Traktor S4 landed, it made a big imprint. Not just because of its size, but because it was the first complete official controller solution for Traktor and its new Sample Deck functions. But it was expensive, and it wasn't exactly a slim fit in most DJ booths.

If you'd been following NI's Traktor product launches, you wouldn't have been laughed out of the room for suggesting a two-channel version was on the horizon and lo and behold, she has arrived.

So what's changed? Well the first obvious omission is the missing channels - you've only got hands-on control of two this time. Also, the Sample Deck and Loop Recorder that made the S4 so flexible have also been chopped out in favour of a Shift-function Sample Deck control, which we'll get to later.

It's not all cutbacks though, there's now a dedicated Booth output with volume control, something the S4 lacked, although we'd prefer the volume control at the front rather than indented at the back.

Speaking of connections, channel inputs are no more, while outputs are taken care of by either TRS or phono, which annoyingly shares the booth output.

The footswitch input and physical MIDI I/O have also left us, but there is a MIDI mode for non-Traktor control use.

On top, the charming seven-segment LED has left us and loading is now done via the buttons under the endless rotary and, thankfully, pushing the Browse button now expands to Browser view.

What's also missing is the one-knob filter. This might seem like a big issue, but we've always had a gripe as it never had an on/off button so resetting it to 'zero' in time for the drop was never perfect.

Now, holding Shift turns the Gain knob into a filter control and because it's a push-able rotary, it now has an on/off switch. There's nothing elegant about this and adding a shift-function to the gain knob could be dangerous, but don't forget you can sacrifice an effect slot for a filter too.

We also wish NI had added EQ kill to this model, as it's been a consistent user request. Plus, there's now no way to switch between Group and Advanced effects from the controller.

The most blatant omission from the S2 is the Sample Deck control. Loading a sample is now a little trickier.

Under the new Sample rotary press A or B depending on which deck you want to load to, then load a loop from the track playing or a one-shot from the Browser. It'll remain muted until you press the corresponding Cue button, one through four.

There's no way to control the volume of individual samples from the controller but they can be assigned to effects section one or two. It's clunky but it's a compromise. If you're a heavy user of the Sample Deck, you won't buy the S2.

It's not exactly fair to put the S2 up against its peers. After all, it has the advantage of being part of the company that design the software, so it won't be made redundant by an add-on anytime soon.

It's expensive now that it's lost its inputs and although NI will argue you get the full version of TP2, most users who are willing to spend £500 on a controller, will already own the software.

What we do love about the S2 is its simplicity. We first used this in a club without ever having turned it on and we got it instantly. It trims the fat of the S4 and delivers an elegant controller experience - something you can't understand by reading the specs.

As Pioneer's DDJ-T1 was our favourite S4 competitor, the ball is now in their court to see if they'll attempt to match the S2. Until then, unless your set relies on DVS, Sample Deck or the extra inputs the S2 'just works' and feels great in the process.