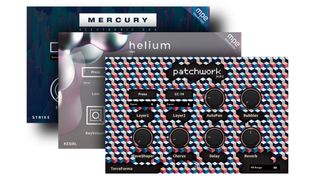 Expressive E, makers of the Touché and Touché SE have been busy flying the flag for their own luxurious high-end continuous controller.

Hot on the heels of their recent pack of Massive X patches, which worked great with macro hook-up to the Touché controller, comes this collection of instruments, with 240 sounds in total, designed primarily for playing using MIDI Polyphonic Expression (MPE) controllers.

MPE is a standard for defining expressive play, letting performers control MIDI instruments by bending between notes continuously, moving in another direction to increase modulation per note.

MPE was recently officially adopted as part of the MIDI spec, and manufacturers such as ROLI, Roger Linn and Haaken have been pioneering this new method for electronic expression.

Expressive E's Mercury, Helium and Patchwork are available as a bundle for €99, or individually for an intro price of €39 (later rising to €49) at the Expressive E website.