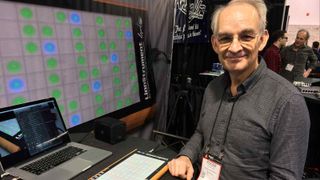 Roger Linn has a gift for knowing what musicians need before they know it themselves. His 1979 LM-1 Drum Computer was the first to combine user-programmable patterns with samples of real drums, while 1982’s follow-up, the LinnDrum, backed some of the defining pop music of the decade.

When Linn Electronics later went out of business, there was actually one massive silver lining for the history of music: Roger Linn moved on to work with Akai Professional, where he designed the MPC60 and MPC3000, machines that would help birth hip-hop and leave a lasting impression on both music and music technology for generations.

While Linn may be recognised by many as a pioneer of drum machines, his legacy is far broader than that. He was a pioneer of digital audio in general, helped to nurture the tools behind the new art of sampling, and put his own indelible fingermarks on today’s music software in the process. And, luckily, for musicians everywhere, Roger Linn is still shaping the future of music technology.

“Actually I just got back from ContinuuCon this weekend,” he says down the line from his home in Los Altos, in Silicon Valley. "It’s a celebration of the Haken Continuum. It was full of people who are smart, creative, and who think that music should be made with more than just on/off switches. The Continuum is a wonderful instrument, and they’re embracing it.”

It did feel a little strange seeing that you were due to speak at ContinuuCon when you have your own ‘rival’ hardware, the LinnStrument. Aren’t Haken Audio your sworn competitors?

“Well in my opinion, our competition’s not each other, it’s the world of people who think that musical instruments should be made of wood, brass and strings. The mission is to establish ourselves as the new method for creating music. Our instruments do everything the old ones did - we’re just a new technology. Compare it to older technologies like frets or strings or tubes or brass: they’re all innovations, and we’re just the latest step in that.

“One problem is that a lot of musical computer interfaces are still very confusing to use. The Haken Continuum contains a built-in sound generator, and it’s a beautiful one, so someone who wants to play one properly doesn’t have to know anything about MIDI.

“Many acoustic musicians have been dragged kicking and screaming into the world of MIDI, and this system of on/off switches, where things don’t work like they do for acoustic instruments. For us it’s second-nature, but we’re just a small part of the community of musicians.”

You chose to use standard MIDI throughout in the LinnStrument - no cludging formats or switching between protocols under the hood. Does standard MIDI - MIDI 1.0 - still really give you everything you need to do what you want to do?

“There’s no limitation as far as LinnStrument is concerned. MIDI gives me everything I need: it gives me the resolution, it gives me the speed - particularly over USB, but even over MIDI cables MIDI is actually very fast.

“Right now there’s no demand for anything except standard MIDI. We’ve created this new extension of MIDI called MPE, which permits things like polyphonic pitchbends by sending each note over its own MIDI channel. It’s really not that innovative - in fact, it’s existed since the beginning of MIDI in the form of what they called MIDI Mode 4, so there was really no big need for any of that.

“MIDI was well-designed, and the proof of that is that it has lasted. There are some wonderful things about the new proposed MIDI 2.0, but the vast majority of what people really want to do has already been made possible by MIDI 1.0. This industry moves very slowly, and we have a lot of small developers who don’t have the resources to support every standard, so MIDI 2.0 might take a long time before it is widely in use.”

So while there are note ons and note offs built into it, MIDI doesn’t have to be a protocol just for making music with those on/off switches that you rail against…

“Well, I made a few of those on/off switches myself in the past. Drum pads are on/off switches - if you strike them, the drum simply rings out from that point on. But a skilled percussionist can do all kinds of finger rolls or muting with the other hand, for example. There are more aspects to percussion than just striking things, more than simple note on and note off.”

What have you always thought about the music made with your drum machines?

“I rarely listen to anything with drum machines in it. I tend to like more softly played music - music that’s created in that beautiful space between silence and whispers. When you start out there, there’s a great range of emotion available to you, but when somebody starts out at 0dB, there’s no place to go.”

There’s a lot of talk about ‘that MPC swing’. Can we get this straight from the horse’s mouth: is there anything to it and, if so, what?

“The magic comes in all the places in between: at 54%, you get straight sixteenths with just a little bit of swing, and at 58%, you get a very loose and natural swing.

“That being said, you also have to trim the start of the sample tightly, and the software has to have sufficiently tight timing so that the notes play at the right moment.”

“Yeah, that’s correct. Swing is a good example of an effective use of technology in music because it provides a musical feel that would otherwise be very difficult to play live, but you still have to be a creative human to play in the part yourself.

“Timing quantisation is another good example in that you still have to play in the part, but quantisation corrects the errors in timing that all but skilled drummers tend to make. When I created both of these features in 1979, it was my intent that they should aid the musician’s skills, not replace them.

“We’re all trying to find the correct balance between technological assistance and human skill. In our search, I think sometimes we’re going too far in the direction of letting technology replace human skill. Some people prefer to spend weeks programming in every detailed nuance of a great instrumental solo, rather than taking the time to practise and develop more performance skills.

“Someone told me a comment Quincy Jones made about such detailed editing: he said it’s like painting a 747 with a Q-Tip, and I think that’s true. As time moves forward, we’ll all realise that if something can be programmed, it’s no longer art. Art is something rare, something we use to describe uniquely talented individuals.”

In terms of successful product designs - particularly those that have changed the face of music - you’ve got an especially high hit rate. What do you think it is about your design philosophy or your approach that’s made it all happen?

“I hear what the customers say, but often what they say they want is not what they really want. I like the quote that Steve Jobs used, from Henry Ford: ‘If you ask people what they want, they’ll tell you they want a faster horse’. And if you look at synths, people are saying they want more LFOs, more envelopes, more envelope phases… because they think that more is better.

“I try to make a product or instrument that, if someone uses it, they say, ‘I wouldn’t have asked for this, but this is exactly what I need’.

“And, presumably, what they want it for is to play music. And so you might consider it a revolutionary idea that, instead of having hundreds more controls and higher quantities of synthesis elements from 40 and 50 years ago like oscillators, filters and envelopes, how about having a better human interface for creating synthetic sounds?

“Instead of controls like Filter Resonance or Pulse Width Modulation, how about music-focused controls like Fat/Thin, Bright/Dark, Consonant/Dissonant, Simple/Complex, and the ability to morph between existing complex timbres?”

What do you see in the future of music technology? What trends, what technologies and what ideas do you think are going to be shaping how we make music?

“I think the idea of expression and continuous control, whether that’s from the LinnStrument, the Continuum, the Roli Seaboard or some of the others, is the next movement - it’s just that people don’t recognise it yet. But most synthesists are still asking for what are essentially better on/off switches, and our problem is about how to show people how things could be.

“I think LinnStrument and the other expressive instruments can provide the musical expression to bring electronic music into the foreground, something that today’s on/off switches can’t do. Then you may see a new movement of skilled electronic soloists - the modern-day equivalents of Miles Davis, Jimi Hendrix, Django Reinhart or others”

What needs to be done - or what needs to emerge - to bring the expression back? It looks like the tools are there, but how do you plan on getting more people to play them?

“Most people don’t see the future; they look at current recordings to see what they want to play. I think there needs to be more good examples of expressive electronic instrumental performance in recordings and concerts. We need examples of true visionaries before people really see why this expressive technology is so meaningful.

“There has never been a greater opportunity for the new stars of expressive electronic music to emerge. When I was a young guitar player, there were lots of skilled players, so it was hard for me to break through. But for expressive solo electronic musicians today, there’s virtually no competition. If some young and talented visionary wants to become one of these new instrumental solo stars, the field is wide open.”