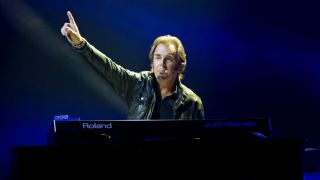 Don’t Stop Believin’ started as a chorus idea I had written down and worked out at home. The song was originally inspired by something my father would say to me during my struggles in the music business in Los Angeles.

At that time, I was without a record deal, and I had basically taken a break from music. I didn’t know what I was doing. But my father always believed I would succeed, and would regularly say “Jon, don’t stop believing,” on the phone to me from Chicago. So I wrote that down and started working on it as a chorus. When Journey’s original keyboardist Gregg Rolie left the band, they asked me to join and contribute material to finish up their Escape album. I brought my unfinished chorus into them. And that’s where it all began.

The original chorus to “Don’t Stop Believin’” included the chords, the melody, and the lyrics “Don’t stop believing, hold on to that feeling.” I didn’t know what the next line was going to be at that point – but I knew the melody would go up at the end to complete the phrase. The bass line was also different at first, with just a driving, eighth note figure throughout. My original chorus looked like this:

So I brought the chorus into rehearsal. At that time, we had a warehouse that we practiced in, so we played the chords over and over again as a band, looking for places the song could go. [Singer] Steve Perry liked the chords to the chorus so much, his idea was to use them for the entire song, breaking them down to sing the verses over. So we started exploring the chords, and Perry said to me, “Instead of just playing the chords, give me one of your rolling, signature piano riffs.” At that time, I had just left the band The Babys, where we had had a song called “Turn And Walk Away” that had a rolling piano intro. Perry was looking for something that captured that side of my musical personality, so I broke the chords up into an eighth note riff, which became the song’s signature piano part. Because we were using the same chords for the song’s verse as the chorus, we needed to make the verse stand out. So we disguised the chords in the arpeggiated piano riff you hear today. Perry and I loved classic soul artists like Marvin Gaye, who could write great songs with just four chords repeating over and over again. That was the goal we set for ourselves.

Perry then said ‘Let’s keep the chords, but come-up with a different bass line.” The goal was to make each section of the song unique. So Neal Schon started experimenting with the bass line, and came-up with a new one over my moving piano part, which he showed to Ross . Ross had a really unique bass sound, almost like that of a cello player. He tweaked his amp and added a flanger to get his parts to really bark. The piano and bass parts together look like this:

Perry then started looking for a melody to sing over the verse that would take the same chords into more soulful territory. We hadn’t crafted the lyrics yet, but he was humming what would eventually become the song’s soaring melody. It sounded great to all of us.

Next, Perry decided that we would play another verse, because the song felt like it needed to develop further. While we were playing the chords as the re-intro to the second verse, Neal started playing what would become his signature, sixteenth-note, ‘going down the train tracks’ guitar arpeggio, which he played double time over my eighth note piano part.

After the second verse, the song felt like it needed to go to the IV chord. But instead of just playing a standard IV chord on the B-Section, Neal had the idea to play the V chord over the IV chord bass note, rocking back and forth between that and the IV chord. I doubled Neal’s guitar part on keyboards, using an ARP Omni string patch through a Roland Dimension D chorus, added to fatten the keyboard sound up. Perry picked-up on Neal’s alternating chordal figure, eventually using the same melody notes for the B-Section lyrics “Strangers” and “Waiting.” This added an element of tension and release, played by the entire band. The B-Section looks like this:

At this point I said to Perry, “Are we going to bring the chorus in now?” And he replied, “No, we’re gonna save it.” It was his instincts to keep building the song, saving the chorus for the end. We kept refining the song, with Steve Smith adding his signature, world music-esque drum beat, and Neal contributing his soaring guitar solo as well.

The next day, after we had decided on a band arrangement of the song, I went to Perry’s house and we worked on the lyrics together. He sang and played bass while we both listened back to the tapes from the day before. I said to him, “This sounds like a train going down the tracks.” Perry agreed, and we started looking for clues to tell the song’s story. I said to him, “I love the song ‘Midnight Train To Georgia.’ What if this is the midnight train going anywhere?” And his eyes lit up. I continued. “This could be like a “Jack & Diane” story, of a guy and a girl.” We knew we were on to something. Later, Perry and I would craft the B-Section lyrics out of our time spent cruising up and down the Sunset Strip in Los Angeles, with its endless menagerie of wandering souls. I would think to myself “Where did all these people come from, and what in the hell are they doing here?” They would eventually become the “Streetlight People” in the chorus, completing the song that would change the course of my life forever.

Back to the future - Jonathan Cains new keys

Journey’s Jonathan Cain is coaxing vintage vibes from the latest in keyboard technology these days. “I’m actually embracing the new Roland V-Piano Grand,” Cain tells me via phone from Texas, where he just finished a stop along Journey’s Eclipse Tour. “I’m also playing the new Roland Jupiter-80, which is an amazing box as well. Those two keyboards have just been tremendous. Having them on-tour has made things much easier on everyone. We’re more of a rock band now, and using my Fazioli acoustic piano on stage became almost impossible. It was hard to get the piano up in the mix, and it was howling in the PA speakers as well. The V-Piano solved all of that. Now the Faz will have a permanent home in my new studio Addiction Sound.”