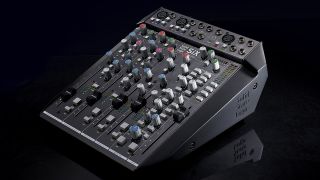 This category is all about the unsung heroes of the recording environment and you'll see the melding of old and new has been a recurrent theme in 2019. The best new studio gear top spot is occupied by a relatively small modern box with a big, old name on it, where as elsewhere compact monitors and an analogue-style mixer with a digital heart made the grade.

SSL is renowned as a maker of studio consoles. The SiX gives home producers and other mere mortals the chance to procure the "sonic signature" of a larger SSL console on your desktop. Offering two channels with SSL SuperAnalogue Mic Pres, with built-in EQ and compression, plus 100mm faders for nuanced mixing.

A reversal of the downsizing trend, the iLoud MTM sees IK Multimedia enhancing its popular iLoud Micro Monitor into a larger, yet still compact footprint.  There's near-instant calibration using the included ARC microphone and two 3.5-inch woofers and 1-inch tweeter, which are designed to deliver a more natural sound and reduce ear fatigue, meaning that you can mix for longer.

A digital multitrack recorder that feels like a retro analogue mixer, Tascam's Model 24 aims to strike the ultimate balance between old and new, tactility and digital convenience. The Model 24 features XLR mic and 1/4-inch line inputs, while unbalanced RCA and stereo minijack inputs are also catered for. On top of that, it's an audio interface offering 24 tracks of 24-bit/48kHz audio and there's also Bluetooth connectivity, so you can stream audio from a laptop or mobile device.

A set of producer-focussed headphones that are tailor-made for studio applications. They've got a closed back design for shutting off outside noise and can be adjusted for single-ear mounting. What's more they're very comfortable - using a wide headband  to distribute the weight and memory foam cushions around the ears.

KRK’s long-established Rokit powered monitors have received a major overhaul and the result is a new line-up of four monitors built around 5”, 7”, 8” and 10” LF drivers. They're well-built and include enough adjustment options to tailor their sonics to the room and your own personal taste.