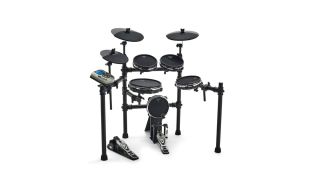 The long-established market leader in electronic drumming took the top spot in this year’s poll, but it’s a field full of innovation and bold ideas.

As hybrid drumming becomes ever more prevalent in contemporary popular music, this seems like a corner of the market that’s sure to grow exponentially and the possibilities, from trigger modules to e-drums and Sunhouse’s sensors that can distinguish between different hits on the same drum, mean there’s never been a more exciting time to explore this brave new world.

Roland’s latest trigger module is designed to appeal to anyone taking their first steps into blending electronics with their acoustic kit. It has connections for two triggers or pads, a foot switch for muting samples or changing sounds mid-performance, includes 15 pre-programmed kits, and is compatible with Mac/Windows and iOS/Android.

Alesis’ latest entry in the sample pad field features nine velocity sensitive playing surfaces allowing more than one sound to be triggered depending on how hard the pad is struck. There’s 32GB of memory, a built-in looping feature, inputs for triggers and foot pedals, and over 8,000 sounds already loaded.

The company set up by Roland’s founder Ikutaro Kakehashi in 2013 looks set to thrive even in the wake of Kakehashi’s passing in 2017. The two electronic kits in ATV’s EXS Series, EXS-5 and EXS-3, feature mesh heads, hi-hats that actually open and close, and cymbals with fully playable surfaces.

Sunhouse’s new sensors bridge the worlds of acoustic and electronic drumming. The system can learn up to ten different hits per sensor, so it’s possible to have individual sounds assigned to different movements on the same drum, from playing the centre or the edge to cross sticks and rim shots.

The new trigger module from DrumIt boasts a universal trigger interface so its compatible with Roland, Yamaha, and Alesis triggers. The unit has a 32 GB memory, plus a card slot for up to an additional 64GB more storage, and the open sound architecture lets players create their own sounds.

This impressive electronic set-up from Tourtech includes a range of features often found only in more expensive e-kits, including mesh heads on the five pads, Dual Zone technology so the pads react to where the stick strikes on their surface, and even choke-able cymbals, plus a library of 458 sounds.