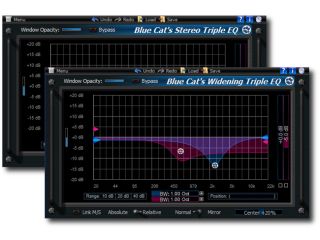 The Stereo and Widening Triple EQ's can be purchased separately or in a bundle.

Blue Cat Audio has updated its popular range of Triple EQ plug-ins to version 3.0. A number of improvements have been made, but perhaps the best news is that the standard Triple EQ plug-in is now free.

Previously retailing for $34, the Triple EQ is a 3-band parametric equaliser that can be controlled as a single filter with a customizable shape. Like the other plug-ins in the range - the Stereo Triple EQ and the Widening Triple EQ - version 3.0 offers a streamlined user interface with simplified controls.

More information on the Triple EQ range (which runs on PC and supports the DirectX and VST plug-in standards) is available at the Blue Cat Audio website.