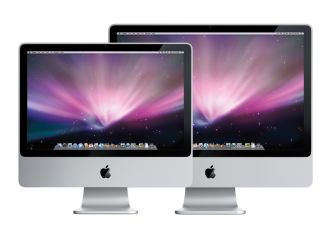 Any new iMacs are likely to look the same as the existing models. (Image credit: Image courtesy of Apple)

We've been struggling to keep up with all the Apple-related rumours of late - if you believed all of them, you'd think that pretty much every product the company makes is going to get an update. However, things seem to be settling down a bit now, and some kind of consensus appears to have been reached.

Most of the in-the-know sorts are now suggesting that a new iPod range will be first out of the blocks, with many sites predicting that this could be launched via a Steve Jobs presentation next week. September 9 seems to be the most likely date at the moment.

This means that those new MacBooks we told you about previously might have to wait - possibly until October - but all the signs are that they're definitely on the way.

More surprisingly, there's speculation that Apple will also update the iMac this year - possibly in November. Before you get too excited, though, we should say that only speed increases are being predicted - any new machines are likely to look exactly the same as their predecessors.

That's about all we know at this point, though obviously, none of the above has been confirmed by anyone at Apple. This being the case, things might actually turn out very differently…