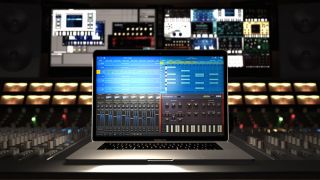 NAMM 2017: Korg's Gadget has established itself as one of the best music-making environments for iOS, and now it's set to make the jump to the desktop with a Mac version.

As well as operating standalone and offering what's described as a "seamless connection" to the iOS version (which presumably means that projects can be shared both ways), Gadget for Mac also comes with the Gadget Plug-In Collection, which means that its devices can be used within your AU-, VST- or AAX-compatible DAW. There's support for the NKS standard, as well as Ableton Link, Bluetooth MIDI and Allihoopa.

Everything takes place on one screen, though you can split this into four windows to give you a better overview of what's going on. Mac users will get all of the 30-plus Gadgets that are currently available, as well two new ones that enable audio recording and an additional 16-pad drum gadget.

More information - including the price, we hope - will be released at the start of the NAMM Show on 19 January. You can also find out more about Gadget on the Korg website.