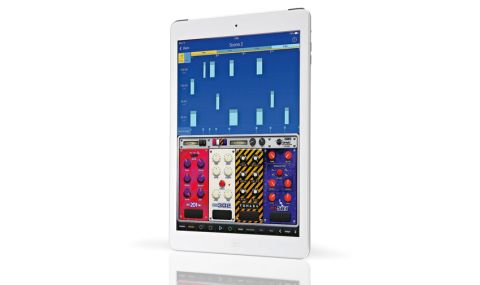 If you have an iPad buying Korg Gadget is a no-brainer. If you don't, maybe it's time to bite the bullet!

Korg can do no wrong in most people's eyes at the moment, combining a well-regarded history of commercial sound and synthesis with affordable analogue revival kit and software emulations of past glories. It was quick to see the possibilities of mobile music on Apple devices, and Gadget is the culmination of much previous work in this area.

Its Mobile Synthesizer Studio concept centres around a sequencer and mixer combined with an array of sound-generating Gadgets. Although there is naturally some overlap, each of them focuses on one main form of sound generation, genre or 'vibe'.

Each Gadget has a distinct look and feel, with city names used in place of the usual numbers, codes (or Greek gods!). They are all very much self-contained in sonic terms, most with their own complement of internal effects, and by no means limited to a few well-crafted presets.

Editing, and in some cases cable patching, is embraced, which makes a huge difference to the possibilities of this app compared to some others. Add to this that most parameters can easily be automated, and you have quite an impressive audio playground.

Korg have not explicitly tried to emulate specific items of hardware, and even those with similarities to real-world pieces of kit, are given their own functional slant.

Sequencing in Korg Gadget is based around Clips. Each Gadget has its own set of clips into which one can record notes, automation and other data. These appear above each of the Gadget mixer channels and can be tapped on for more detailed editing operations.

Multiple Clips from each Gadget are played together as Scenes. Scenes can be built from existing Clips by copying and editing them, or from the ground up. A Song consists of a series of Scenes, with each Gadget playing back through its own Mixer channel. A simple reverb send effect can be employed, and there is single-knob Limiter across the Master Output if required.

Frankly, this sounds rather boring on paper. In practice there is quite a bit of flexibility here, and the process is reasonably intuitive, though more Undo options throughout wouldn't go amiss. One particularly neat feature is the ability to Freeze a Clip to save CPU, which can really make a difference on bigger projects or more modest iPads. Exporting a finished song as audio will generate a WAV file, and there is AudioCopy, Dropbox and SoundCloud integration at the press of a button.

The need for speed

The App is only available for iOS 7 equipped iPads, which may flag up concerns for those clinging on to older tablets that may already be a little under-powered. Korg does try to give a fair indication of load expectations for a range of devices on its website.

For testing we used an iPad 4, though even here the best latency setting was a little wanting for programming drums. The speed with which each Gadget opens is a little slow in both the song and scene screens, which proved frustrating.

Another area of concern may be the lack of landscape-mode support. I don't have a problem with Korg choosing to optimise the app in this way, though some docking accessory users may be disgruntled.

In terms of missing features, Gadget doesn't support audio tracks or audio import of samples. We can forgive this of Korg at this stage, as it does make the app relatively self-contained, but this will need to be addressed in the longer term.

Luckily Korg appears to be quite nimble on the update front, having recently added Audiobus support (which we tested very successfully with Cubasis). This update also introduced MIDI and Automation improvements and a Beginners' Guide to the App, which certainly helps get the ball rolling.

Korg have stated that further gadgets and audio tracks are in the works already. We'll have to wait and see how far they wish to take the integration with external hardware. All told we found Korg Gadget a huge amount of fun. But perhaps more importantly, we used it as a genuinely useful writing tool.

The ability to generate interesting ideas, sounds and sequences, export them as WAV files to Dropbox, and have them downloaded and in my DAW almost immediately was very useful. As your primary production software it certainly has weaknesses and frustrations (particularly for those with human-sized fingers!), but in my view this doesn't diminish what amounts to its exceptional value for money.