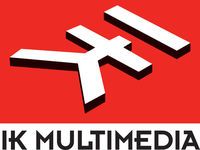 IK has got its tease on.

IK Multimedia, the developer behind the celebrated AmpliTube for iPhone/iPad and its companion iRig audio interface, has revealed that it will be launching new iOS products at the CES show in Las Vegas this week.

The company is currently staying tight-lipped about what said products will be - we don't even know if they're software, hardware or both - but the veil of secrecy will be lifted on 6 January.

The new iOS gear will also be on display at next week's Winter NAMM show, at which MusicRadar hopes to get properly hands-on with them.