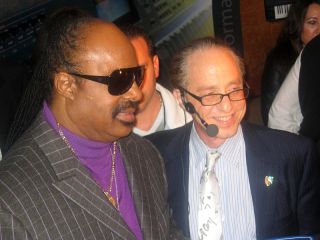 PRESS RELEASE: 25 years since the launch of Kurzweil's K250 ground-breaking synthesizer, Stevie Wonder joined Ray Kurzweil for the launch of Kurzweil's new flagship model, the PC3K. On Friday night, in a small suite at the Anaheim Hilton, an invited audience saw Kurzweil present Stevie with the new model who then enthralled the audience with an impromptu performance of two songs.

The PC3K keyboard expands the PC3 line to include key new features along with backwards compatibility with the legendary K Series product line. In addition to all of the innovative features that made the PC3 a major success, the PC3K features 128 MB of non-volatile user sample memory. Utilizing a breakthrough in sample flash technology, the PC3K allows user samples to remain intact after a power-cycle, with zero load time upon powering back on. The PC3K can load .WAV files, but more importantly, it can load legacy Kurzweil .K files from the K2000, K2500 and K2600 keyboards. This opens up a whole new world of sonic possibilities; users can now combine the PC3K's unmatched Dynamic V.A.S.T. synthesis engine with the staggering library of K Series samples generated by users and developers alike for over 15 years.

Along with K Series samples, the PC3K will support the importing of most K Series keymaps, programs and setups, providing seamless integration for existing K series customers and an enticingly large collection of sounds for new Kurzweil users to explore. From Broadway and West End performers and high profile pop stars to working players, the PC3K will allow musicians who've relied on Kurzweil for years to continue using their sounds with the next generation of our technology, without having to start over from scratch.

Mike Papa, Kurzweil National Sales Manager for American Music and Sound, couldn't be more thrilled. "This is the breakthrough the industry has been waiting for - the added value of 18 years' worth of K Series sound development is simply immeasurable. It's mind-blowing to think that artists can continue to build upon the body of work they've been creating for just under two decades, when most other manufacturers require users to re-invent the wheel each time a new platform is introduced."

In addition to the ability to load samples, the PC3K offers basic sample editing and full keymap editing. Of course, all of the features and presets that made the PC3 so popular are present as well; anti-aliasing VA oscillators, improved KB3 Mode, Classic Keys, Orchestral and String Sections sound sets, the renowned Kurzweil Grand Piano, Cascade Mode, 16 independent Riffs and arpeggiators, Song Mode and QA mode, unparalleled MIDI control, and the list goes on.

Another major improvement added to the PC3K is the inclusion of a USB host port to support the use of thumb-drives for data loading and storage as well as OS updates.