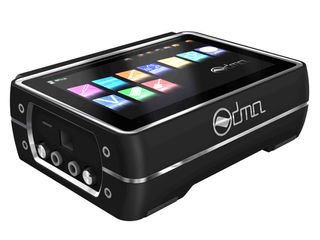 Can it really be anything and everything you want it to be?

Musikmesse 2011: We first mentioned new company Dark Matter Audio and its debut product the DMA1 last week, well now full details of the intriguing looking gadget have arrived. Check out the company's full press release below to get the lowdown on this new touchscreen, musician-focused smart device.

It's certainly caught our attention - and we'll be tracking down Dark Matter to see if we can get hands-on with the DMA1 when the show opens tomorrow.

The landscape for the creative artist in any audio environment is about to leap into a new future with the arrival of new UK company Dark Matter Audio and its revolutionary debut product: DMA1.

This incredible audio device is anything you want it to be - guitar effects processor, high quality studio tool or performance instrument - thanks to its open architecture and Online Store that lets you wirelessly update DMA1 with a growing range of pro audio apps.

DMA1's capabilities are extensive: a compact multi-FX processor that can also act as a digital multitrack recorder, MP3/4 player, MIDI interface, (up to) 5.1 digital mixing desk.

But unlike today's explosion in Smart Devices, DMA1 is built from the ground up for music making and is entirely focused towards musicians and producers, while rugged construction means it can be used anywhere - on stage, on the road, in the studio and even in outside broadcast situations.

It's been designed without compromise, featuring both high quality audio processing power - by way of a SHARC and an ARM processor for the user interface - and professional connectivity, while the 7-inch Touchscreen makes for quick, intuitive hands-on control, making DMA1 inspirational to use with professional results every time.

With its innovative design, DMA1 really exploits the future of music making, performing and recording. DMA1 is the ultimate studio and performance tool, right there at your fingertips.

Dark Matter Audio CEO Jon Stuart said: "with DMA1 we've endeavoured to create a paradigm shift in the world of audio production and performance. DMA1 is the future of audio and music production precisely because it can be any future that a musician or producer could want.

"This is a very exciting time for us, and for music production generally, and I'd like to take this opportunity to thank the team for their ceaseless toil (bar the occasional spot of skiing) to make DMA1 the revolutionary product that it is."