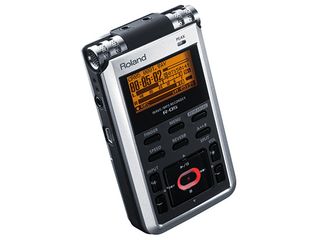 The R-05 can automatically set the optimum recording level.

FRANKFURT MUSIKMESSE 2010 PRESS RELEASE: Roland's compact R-05 is easy to use, affordable, and packed with big-ticket features which raise the bar in its price class. Experience crystal-clear capture, enhanced recording and editing features, and extended battery life (over 16 hours of recording time per charge).

The R-05 provides pristine, uncompressed stereo recording directly to SD card, up to 24-bit / 96kHz resolution. Whether recording directly with the built-in stereo mic or capturing sounds from an externally connected microphone or stereo line input, you'll be impressed with the R-05's detail and clarity. And for worry-free recording, the convenient Rehearsal mode ensures that you won't overload the input (see below).

The R-05 features the same I.A.R.C. (Isolated Adaptive Recording Circuit) as the flagship R-09HR. I.A.R.C. is a newly developed, dedicated analogue circuit optimized for recording with the onboard A/D converter. Electrolytic capacitors provide stable, reliable power with an independent power source for the analogue circuitry, and another power source for the digital circuit board, thus eliminating DC interference between components in the R-05.

Even though the R-05 integrates fluidly with computers via USB 2.0, this new-generation recorder doesn't require a PC for editing. For speed and convenience, you can trim, divide, and combine within the R-05. And for those who'd like to apply a high-gloss finish to their recordings, the R-05 is equipped with built-in reverb.

In a rehearsal studio, you can make clear recordings of your band, even at high volume levels. The R-05 can automatically set the optimum recording level, and can split the songs for you automatically. It's also possible simultaneously to record a high-quality WAV file for CD production and an MP3 file for file sharing.

The R-05 can help you practise your instrument or vocals. You can repeatedly loop a specified region of audio, or change the playback speed without changing the pitch. You can play a difficult phrase slowly or play back at high speed to grasp the overall structure of a song in a short time.

Musicians will naturally gravitate to the R-05, but this pocket recorder is great for many non-musical applications as well: record lectures, speeches, and meetings and more. The high-sensitivity, built-in microphone will clearly capture all the voices in a room. The included windscreen and tripod mount enhance optimal placement and cleaner recordings as well.

On stage, in rehearsal, at school, on the street, in the boardroom, whenever and wherever, let the R-05 capture the moment with convenience and quality.