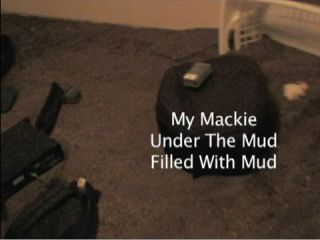 Many of us have had the odd spillage in our studio - beer-related incidents are particularly common - but have you ever had to contend with the problem of your monitors being completely covered in mud and horse manure?

This was what Hollywood resident Badger Koon had to deal with after returning from holiday to find that his house had been filled with the contents of a mudslide. His beloved Mackie SRM 450's were "covered in nasty horse poop and mud", so he decided to take the nuclear option and stick a hose pipe inside them.

Miraculously, once cleaned and dried out they worked perfectly again. "To this day they sound good as new," says Badger. "And they are loud!"

Badger's story has come to light via Mackie's 20 Years Running contest, which was devised to celebrate the company's 20th anniversary and required users to submit stories and photos of their "jaw-dropping experiences with Mackie gear".

Koon has been named the winner of said contest, and is now set to receive (not that he needs them) a pair of Mackie's HD1531 high-def speakers and a 1604-VLZ3 compact mixer.

You can read more about his and other stories on the Mackie 20 Years Running website and watch Badger's video below.