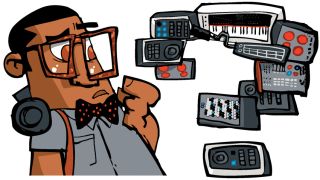 When a seasoned computer musician is asked by a beginner for advice on what gear they need to buy to get started in desktop music production, there's an obvious list of usual suspects. They're going to need a decent computer, obviously, plus a DAW application, an audio interface and a set of monitor speakers.

You could argue that the buying decisions involved in acquiring those particular items are largely just a matter of preference. There are loads of products in each of these categories but, by and large, there are plenty of points for comparison and in some cases, they are designed to do pretty much the same thing any way.

However, when it comes to another category of product that many would consider near-essential for getting into music production, things are rather different. We're talking MIDI controllers.

"There are now so many different designs available that choosing the best one for your requirements isn't easy."

On the most fundamental level, most MIDI controllers are indeed similar - you press or tweak something on a physical device and this movement is translated into data that controls the software you're currently using - but there are now so many different designs available that choosing the best one for your requirements isn't easy. It might even be the case that you don't really need a MIDI controller at all.

We've discussed the idea of 'playing' your laptop in a previous article, essentially turning it into its own MIDI controller, discovering various 'built-in' options for controlling your software along the way. If you explore some of these, you may find that, when combined with your mouse, you simply don't require any other controls.

This caveat aside, it's fair to assume that many will come to the conclusion that they do need a MIDI controller of some description. Let's run through some of the main points to consider.

The most obvious and widely available type of MIDI controller is the keyboard, but even there you've got options aplenty. If you're a competent player and plan on making most of your music in your studio, a four- or five-octave model is sensible, and you might want to go for something with semi-weighted or even hammer action keys as opposed to effortless keyboard-style ones.

Those who aren't so proficient and simply want to play in basic chords, basslines and lead parts should be satisfied with a smaller 'board; the market is now awash with 32- and 25-note keyboards, which have the obvious advantage of being more portable. If you want to combine mobility with a decent octave range, consider a model with mini keys, but don't expect to be able to play with quite the same level of fluency on it.

Once you know how many notes you want and what size they're going to be, consider what (if any) other types of controllers you want built into your keyboard. The majority of keyboards now come with at least a few knobs and maybe a bank of faders and buttons - great for getting hands-on with your plug-ins, mixer and other DAW elements - and if you want the most cost-effective solution to your MIDI controlling problem, buying an 'all in one' device like this is clearly the best option.

Do think carefully about how you're going to use your controller though: if you buy a jack-of-all-trades model that ends up not quite meeting your requirements, it could be a case of false economy.

The right tools for the job

Another option is to buy a sparsely furnished keyboard and get your other control kicks from another, more focused device - or, indeed, devices. It's not beyond the realms of possibility that you might have a keyboard, a knob-heavy controller, a mixer-style surface and a pad controller all in your setup, for example. This lot might end up costing you a pretty penny, but will give you more options and be less fiddly to use than if everything is packed into a single device.

"You could even go the trouble of commissioning someone to build a controller of your own design."

Manufacturers are starting to push this 'modular' philosophy on a smaller scale: in 2011, Steinberg launched its CMC controllers for Cubase, and Livid Instruments has just released its elements devices, which can be combined to create the custom controller of your dreams.

If you want to take things even further, you could even go the trouble of commissioning someone to build a controller of your own design: at Zayik, for example, you can drag pieces onto a template to spec up a bespoke control surface and get it built. This will cost you more than an off-the-shelf model, but if you have very specific requirements, it may be worth the extra outlay.

Another question to ask yourself is whether you want a controller that 'just works' with your software, or if you'd prefer a more open-ended solution that can be programmed to operate in pretty much any way you want. Nektar's Panorama, for example, is sold very much on the strength of its Reason integration, but at the opposite end of the scale, you'll find controllers like the pad-based monome, which are blank canvases on which to project your ideas.

More commonly, you'll find controllers that come with a selection of templates for the most popular DAWs and plug-ins, but also enable you to configure their controls manually. This is nowhere near the chore that it once was, but you might still have to accept that a bit of setup work is required to make it play nice with different synths and applications.

All of this might sound like a lot to take in but, believe it or not, there are many other MIDI controlling avenues of opportunity, too. If you're a guitarist, you can consider fitting your instrument with a MIDI pickup system, and there are myriad 'alternative' controllers out there, too.

If you don't get along with keyboards, you might like to try C-Thru music's distinctive AXiS controllers, which let you play notes with buttons laid out according to the Harmonic Table. Snyderphonics' Manta, an innovative touch-based controller, is another inventive option, and if you have money to burn and want the ultimate in futuristic controller-based expression, check out Eigenlabs' Eigenharp.

While we're talking 'touch', there are now numerous controller apps available for Apple's iPhone, iPod touch and iPad - you can even get an iOS version of JazzMutant's now defunct but groundbreaking Lemur! If you already have an iDevice, the advantage here is that, in many cases, you'll only have to pay a few quid to get a decidedly different kind of control surface which might push your music in a whole new direction.

All of which might leave you feeling more confused than when you came in: do you choose a controller based on what you think you need, or is it better to pick one that breaks the mould and see where it takes your music? When making your decision, you have to strike a balance between the practical and creative, or accept that no one controller will give you everything and consider investing in multiple devices and/or apps.

This article originally appeared in issue 183 of Computer Music magazine.