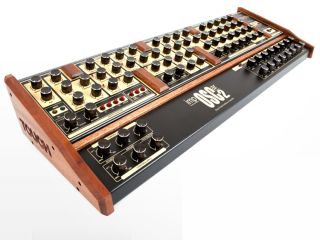 The ImpOSCar 2 controller is the first product from Touch Digital Controllers.

We first heard about GForce's ImpOSCar 2 synth at Winter NAMM 2009, then in 2010, the company commissioned a one-off hardware controller for it. We were told at the time that this wasn't going into production (the controller rather than the synth, that is) but on the day that ImpOSCar 2 has finally been made available to buy, a similar control surface has come to market, too.

Let's deal with the software first: the original ImpOSCar was an emulation of the OSCar hardware synth, and its successor adds several key features. It can now be used as an effect as well as an instrument; there's an improved arpeggiator; there's a beefed-up Unison section; and a Chord Memory button adds more creative options.

The Mac version of ImpOSCar 2 can be purchased now from the GForce website for €139 excluding VAT. A PC version will follow.

So what of this controller? Designed specifically for use with ImpOSCar 2, it comes from a new company called Touch Digital Controllers and features 83 knobs, seven LED-lit buttons, two punch in/out switches and nine momentary buttons (that's 101 controllers in total). All controllers are voltage-controller components, and the knobs are custom-made aluminium affairs. The vintage look is completed by thick oak and mahogany wood end-cheeks and inserts.

Because the controller supports MIDI learn, you can use it with any other software instrument too, but this hand-crafted piece of hardware has been designed to mirror ImpOSCar 2's interface as closely as possible. It's not cheap - £749 plus tax and shipping - but we can already imagine that the experience of using it in combination with GForce's software is going to be pretty special.