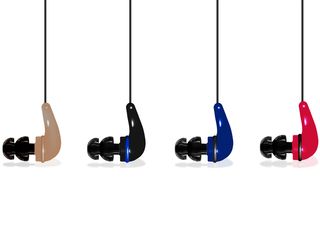 Future Sonics only recently revamped its line of Atrio in-ear headphones, but at this year's Audio Engineering Society (AES) convention, it's gone a step further. Here are two new models: the Atrio M3 and the Atrio M9.

The M3 comes in earth beige colour while the M9 is ruby red. That's the only difference. Both include an MG5pro driver, 18Hz - 20,000Hz frequency response and 32ohm impedance. The 1.3m connecting cable (called QuietCables II) is apparently very flexible and somehow less likely to get tangled up.

According to Future Sonics' president Marty Garcia, the choice of body-colour is kind of a big deal: "In the house of worship market, a stealthy, warm earth tone colour was our number one request."

Unless your earphone-wearing band-mate is being filmed and projected onto a fifty-foot screen, will anyone even notice the colour? Actually, for the $199 price tag, we'd want them to stand out a mile…