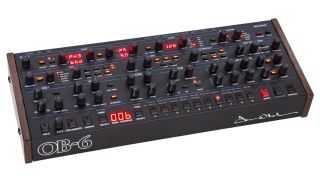 Dave Smith Instruments has announced it is now shipping the a desktop module version of their acclaimed OB-6 six-voice analogue synthesizer.

It boasts a sound engine identical to the keyboard version, which was inspired by Tom Oberheim's original SEM. Featuring an all-analogue signal path with discrete VCOs, VCAs, and filters as the keyboard version, the module also features the knob-per-function front panel, offering immediate access to virtually all parameters.

As Dave Smith explains: "The OB-6 has met with unprecedented approval from across the music industry. In just the six months since its release, it's been adopted by an extraordinary number of artists and is already appearing in projects across the world."

He adds: "We wanted to make the desktop version available as quickly as possible to make it even easier for musicians to take it on the road or into the studio. We made it a priority that the desktop version retain the same powerful sound, and easy-to-use front panel interface as the keyboard version.

"We also added a poly chain feature so that any two OB-6s can be paired for 12-voice polyphony."

Now we're not sure if you'd want to be shelling out for two, but could work well with Prophet-6 module, should you already own one of course.

The OB-6 desktop module is available now with a MAP of $2,299. For more information, go to the Dave Smith Instruments website.