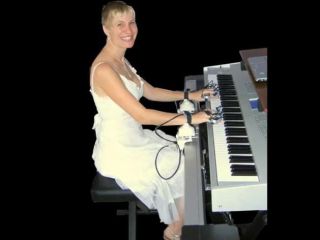 "Just keep smiling - we'll let you out in a minute."

Our teachers always told us that there are no shortcuts when it comes to learning the piano - it's all a matter of practice - but the makers of the Concert Hands system seem to disagree.

It might look like the kind of thing that would be laughed out of Dragons' Den, but this hardware product promises to have you "playing beautiful songs in a matter of days". It comprises a controller box, ten finger sleeves and the wonderfully named wrist pilots.

The idea is that, once you're strapped in, Concert Hands will gently guide you round the piano and get you in position to play the currently loaded song. Each finger sleeve is capable of transmitting an electronic pulse, and the wrist pilots run on a rail. Songs are loaded into the Windows-based software, while data is transmitted via the controller box.

The system is manufactured by Rubato Productions Inc, and it says that the idea is that, after a period being 'taught' by Concert Hands, users will develop the muscle memory required to play on their own.

This sounds plausible, though we'd be interested to see whether the wrist pilots would be able to cope with fast, technical sections that require your hands to jump around the keyboard.

We also fear that, should friends see Concert Hands in your house, they may mistake it for an instrument of torture rather than musical learning and quickly excuse themselves.

For most people, though, the biggest problem will be price. The full version (which can be fitted to any 88- or 76-note piano or keyboard) costs a whopping $9,995, while even the cutdown mobile version is $4995.

Still interested? Then check out Concert Hands in action below.