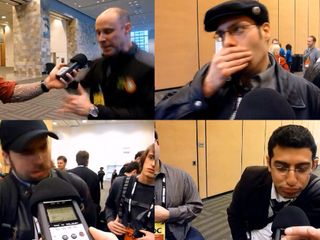 We've walked the halls at our fair share of trade shows, and although the experience can often be rewarding - you get the first look at lots of nice new gear - we have to admit that it doesn't really get our creative juices flowing.

We doff our hat, then, to Mick Gordon, a video game composer who rocked up to the Games Developer Conference 2011 in San Francisco armed with a microphone. He asked everyone he bumped into to make a sound with their mouth, and recorded the resulting grunts, groans, moans, screams and screeches.

Mick then used these sounds - and nothing but these sounds - to create the track you can hear in the video above, as he explains: "Absolutely everything you hear in this track was made by manipulating these recordings using various sound design techniques.

"Every drum, lead, chord and effect was, at one point in time, a recording of somebody making noises with their mouth at GDC San Francisco 2011. No other samples, synths, instruments or recordings were used in this track. Whatsoever."

It's an impressive feat, and one that feature contributions from various games industry luminaries, including two composers associated with the Mass Effect franchise, voice actors from Skyrim and Bioshock 2, and even a former Fear Factory keyboardist.

You can find out more about the project at Mick Gordon's website.