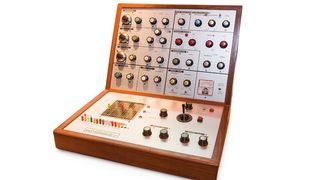 Once upon a time, when synthesisers were massive, expensive installations exclusive to universities, studios and the wealthiest of synthesists, pioneering musician Peter Zinovieff partnered up with electronics boffin David Cockerell and composer Tristram Cary to form EMS. Their first product was the VCS3 synth, released for the princely sum of £330 in 1969 - a year before Moog's legendary Minimoog.

Like the Minimoog, the VCS3 was meant to be portable. This was a synth you could gig with, which loads of famous musicians did, from Pink Floyd and Roxy Music to Hawkwind and Heldon. There aren't half as many software emulations of the VCS3 as there are virtual Minimoogs, but there are plenty of reasons to keep one in your plugins folder, and just like the hardware, getting what you want from it requires a solid understanding of its featureset.

Anatomy of a classic

The VCS3 is a three-oscillator synth, with the third oscillator intended as an LFO (although it works perfectly well into the audio range). Each oscillator produces two waveforms, and other sound sources comprise a noise generator and a pair of audio inputs.

A ring modulator and an 18dB resonant filter are onboard, the latter based on an unusual (but cost effective) array of diodes and lending the VCS3 an instantly recognisable character.

A spring reverb adds a little ambience (and a lot of noise) to the signal, and there's a four-stage "trapezoid" envelope generator with knobs for Attack, On, Decay, and Off. Setting Off anywhere less than fully clockwise makes the envelope re-trigger. Neat.

All of this seems pretty basic, but what makes the VCS3 so special is its patching system. Unlike cable-laden semi-modulars such as the ARP 2600 or Korg MS-20, the VCS3 uses a 16x16 matrix into which pins are inserted to connect sources to destinations. The pins themselves have varying tolerances, making the process beautifully, astonishingly unpredictable.

Since the VCS3 has no keyboard, EMS sold optional velocity-sensitive monophonic (DK1) and duophonic (DK2) ones, each of which added a VCO and a VCA to the synth.

The VCS3 is often maligned for its instability, but our resident synth expert Scot Solida assures us that his VCS3 (when tuned and scaled) is pretty dependable. Of course, tuning isn't a worry when using a virtual version, but how close does software come to accurately mimicking such an erratic and esoteric piece of kit? Xavier Oudin of XILS-Lab, creator of the superb XILS 3 emulation, tells us, "The sound was a challenge. Each time I heard it, I thought that a soft synth could never do this - I still think the same, but software can be very, very close!"

A handful of new units trickle (very) occasionally out of EMS, but that hasn't affected the staggering second hand prices of this rare and sought-after instrument. Oudin reckons he can pinpoint the source of this classic synth's enduring appeal: "The matrix lets the user play and enjoy patching, and the joystick lets you have fun with endless sound possibilities."

A gorgeous cross-platform emulation that adds a sequencer, switchable ADSR and trapezoid envelope generators, along with modern conveniences like polyphony, patch memory and host sync. The sequencer and matrix both have dedicated preset management. At €149, it costs about 1/100 of an original VCS3 on the secondhand market.

Built with SynthEdit, and so Windows-only, the free KX-Synth-X16 was carefully crafted to emulate the sound and response of the real thing as closely as possible, with oscillators tweaked to simulate the colour of those on the VCS3. Again, sequencing is provided, as are more familiar envelope parameters for those flummoxed by the trapezoid.

Find out more about the KX-Synth-X16

By the time you read this, Alessandro Petrolati's iVCS3 for iPad should be available in Apple's App Store. We've already had a play with it and we can happily report that it sounds fantastic and is a blast to patch and play. Like the original before it, it's a damned near perfect source of psychedelic, spaced-out sounds for mobile musicians.

Find out more about apeSoft iVCS3