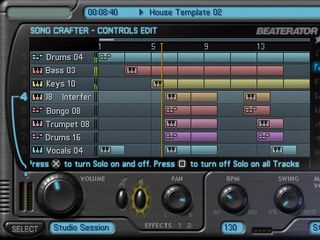 Beaterator has its own 8-track sequencer.

It's taken a while, but it looks like Sony's PlayStation PSP might finally be getting the 'official' music creation tool it's always seemed to be capable of supporting. Rockstar Games has teamed up with super-producer Timbaland to create Beaterator, which MusicRadar saw for the first time yesterday.

It might come from a games company, but Beaterator looks surprisingly capable. First-time users are likely to start with the Live Play mode, which features a cartoon-style Timbaland in the centre of the interface and basically allows you to create music by firing off loops.

However, if you delve into the Studio section there's a world of additional functionality, including an 8-track sequencer, a synth, sampling, loop and audio editing, MIDI file and WAV import/export and automatic timestretching. Here are some screen shots:

One disappointment, though, is that the audio engine is locked to 16-bit/22.05kHz stereo - a fact uncovered by Create Digital Music.

Still, Beaterator is undoubtedly more powerful than we thought it was going to be; it's likely to be the Timbaland-produced loops that get people through the door (we were told that he's supplied around 1,700 of the thousands that come supplied) but there's far more to this software than simple triggering of sounds.

Rockstar also says that, post-launch, various artists' songs will be available for download so that you can remix them.

Let's not forget, either, that music software on games consoles has the potential to inspire the artists of the future (Dizzee Rascal allegedly cut his teeth on Codemasters' Music 2000 for the original PlayStation) and serve as a gateway to more powerful Mac- and PC-based applications.

The PSP version of Beaterator will be released on 29 September, with a cutdown iPhone/iPod touch version to follow later in the year.