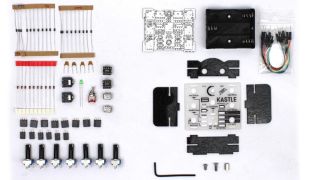 You may be winding down to the end of 2016 in traditional festive fashion, but Bastl Instruments isn't quite done with the year just yet. The Czech outfit has announced not one, not two, but three new products that you'll most definitely want to get in your stocking this year.

Fresh off the back of the tiny Kastl modular synth is the Kastl DIY kit, which you can buy now for €54 from Bastl's online shop, Noise Kitchen.

The second offering is a product from Bastl friend and collaborator Pete Edwards, aka Casperelectronics,​ called the OMSynth miniLab.

The core idea behind the OMSynth is that it's an experimental circuit development and performance interface aimed at beginners, but also more than suitable for seasoned builders and tinkerers.

The breadboard-based open modular synth comes with potentiometers, audio mixer, speaker headphone output, battery or adapter powering and more to get you started, but you can also purchase extra kits that come with very handy tutorial videos.

The video and kits include ways to build analogue oscillators, sequencers and a lo-fi digital sampler.

Edwards and Bastl have already worked together on a previous project called the bitRanger, which was announced at Moogfest this year and neatly brings us onto the third announcement.

Prices for the OMSynth MiniLab start at €70, and it can be purchased from the Noise Kitchen store.

The bitBoard is available for just €10, while the bundle and Synapsis will set you back €25. These can also be purchased at Noise Kitchen.