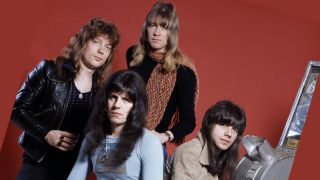 Steve Priest, founder member and bass player of '70s glam legends Sweet has died, aged 72. Fellow Sweet member Andy Scott confirmed the news on the band's facebook page. No cause of death has been announced.

"Then there was one!" wrote Scott. "I am in pieces right now.

"Steve Priest has passed away. His wife Maureen and I have kept in contact and though his health was failing I never envisaged this moment. Never. My thoughts are with his family.

"He was the best bass player I ever played with. The noise we made as a band was so powerful. From that moment in the summer of 1970 when set off on our Musical Odyssey the world opened up and the rollercoaster ride started!

"Rest in Peace brother. All my love."

Megadeth bass player David Ellefson was amongst those paying tribute.

He said that Priest was “without parallel" and Sweet “gave me one of my earliest memories of great hard rock on the radio as a kid and [1974’s] Desolation Boulevard still holds up as one of rock’s greatest albums from that period.”

Born in Hayes, England, in 1948, Priest grew up through the British rock 'n' roll boom and the '60s. In 1968 he formed a four-piece with singer Brian Connolly, drummer Mick Tucker and guitarist Frank Torpey. First choice band name Sweetshop was taken, so Sweet were born.

Torpay departed, eventually replaced by Andy Scott, and the classic Sweet line-up enjoyed multiple hits in the 709s, including Wig-Wam Bam, Block Buster!, The Ballroom Blitz, Fox on the Run, Action and Love Is Like Oxygen.

Connolly left The Sweet in early 1979, leaving lead vocalist duties to Priest but the band split for good in 1982.