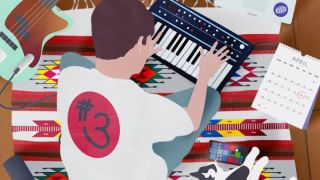 To mark April (Avril) 14th, Novation has released an Aphex Twin-themed firmware update for its Bass Station II analogue synth. Based on guidance from the UK electronic icon, this latest firmware drop adds something that Novation is calling ‘AFX Mode’, along with several other new features aimed at creative sound design applications.

According to Novation: “Electronic music legend Richard James, aka Aphex Twin, has already played an instrumental part in the Bass Station II story, having provided guidance for the implementation of the micro-tuning added with Firmware v2.5. His conceptual contribution to v4.14 is even more profound.”

The centrepiece of this update, AFX Mode allows the BS II’s synth engine to be edited on a note-by-note basis. This is done using a system of overlays, which can be loaded over the top of the current preset and can contain independent parameter settings for each note on the Bass station’s 25-note keyboard. In practice this lets the synth engine trigger a totally different sound for each note triggered, which can be great for creating drum kits or arp lines with lots of variation.

That’s not the only addition here though. Version 4.14 also adds a fixed-length envelope mode to the synth, which transforms the BS II’s standard ADSR envelope generators into ASR envelopes that have a fixed duration, regardless of note length. These kinds of set length envelopes are particularly handy for designing short percussive sounds. On the envelope front, the update also adds retrigger counts, allowing users to set a specific amount of times the amp or mod envelopes will loop.

Elsewhere, the update also considerably expands the usefulness of the synth’s sub oscillator. In the original synth design, this sub osc would permanently track the pitch of osc 1. Here it becomes fully tunable via the course and fine controls in the oscillator section, effectively turning it into a fully-fledged third oscillator.

Finally, v4.14 also introduces an oscillator glide diverge mode. This allows separate glide – or portamento – settings for oscillators 1 and 2, and is capable of some wonderfully odd results that are great for adding detune and thickness to sounds.

Bass Station users can grab the update now for free via Novation Components.