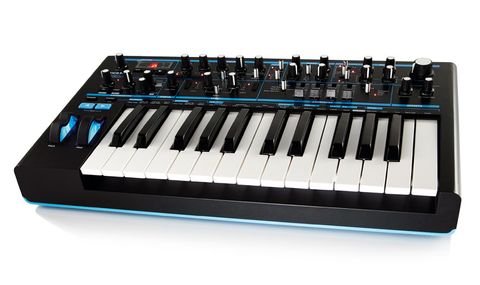 They say never go back, but Novation has and we're all the better for it. Cheers!

Novation's original Bass Station was launched an incredible 20 years ago. It proved enormously popular and it's worth remembering why. The music tech landscape was very different in 1993; all-conquering DAWs didn't exist, few people understood the term 'software instrument', and more importantly, high-tech shops were full of the tail-end products of the synthesizer 'S+S' revolution. These were producing lush polyphonic tones built from digital waveforms glued to short samples.

Into this landscape was launched Novation's analogue monosynth, its name suggesting it was a niche product for bass. Years earlier, the TB-303 showed us that such ideals were worth pursuing and, sure enough, the Bass Station sold by the bucket-load.

To an extent, it helped launch the current appetite for all things analogue. But with synths from Moog, Arturia, DSI and others now competing directly with the Bass Station, does Version II contain the sonic ammunition to do battle?

Bass in the place

The specifications of the synth would certainly suggest so. The fascia recalls the original, with its blue and black livery but the all-dial and rocker-switch combination is now replaced by a more tactile control set including sliders alongside the pots and switches.

The Cutoff dial in the top right-hand corner is sensibly placed for immediate tweakability and is afforded a bigger dial for increased performance control.

The architecture of the synth is as follows: whilst there are two main analogue oscillators, these are digitally controlled (DCOs, not VCOs), featuring four main waveforms, which are further enhanced by a Sub Oscillator which offers three. The Sub's pitch is 'locked' to that of Oscillator 1 and can play either one or two octaves below it.

Editing each oscillator involves selecting either 1 or 2 from a rocker switch and then adjusting Waveform, Coarse and Fine Tuning controls, Modulation Envelope Depth, LFO1 Depth and Pulse Width, which can be controlled via the Mod Envelope or from LFO 2.

To the right, a Mixer section allows you to blend volumes of the Oscillators and the Sub, whilst a fourth dial here can be toggled between controlling external input volume, Ring Modulation, or a Noise Generator source.

Then comes the Filter section, which has been significantly revamped. The Classic option here evokes the Bass Station's original filter, which was a key part of its appeal - raspy, powerful and capable of real spit.

Its tone-shaping capabilities have now been expanded to break away from the original's low-pass shape alone; now you'll find high-pass and band-pass options too, all available with 12dB or 24dB slopes. There's also a brand new filter option, Acid. As its name suggests, it's capable of tones which evoke the 303 and its relationship with resonance will have synth lovers drooling.

Below these key sound-shaping modules, the lower panel offers modulation control. There are two LFOs with variable waveshapes, plus Speed and Delay dials, as well as two envelopes (Amp and Modulation), which share ADSR sliders and are selected independently (or together) via rocker switches before changes can be made.

Finally, an Effects section is included, which features just two controls - a post-filter Distortion and an 'Osc(illator) Filter Mod' dial, which toys with level, using Oscillator 2 as its source.

All of which would suggest a capable synth in its own right but the feature set is actually dramatically expanded by a series of Function buttons, which can be enabled/ deactivated by pressing Function and then pressing one of the keyboard's keys.

These functions are usefully sub-labelled into separate areas; Mod Wheel and Aftertouch assignments, for instance, as well as 'further' options for the synth engine, including sync'ing oscillators 1 and 2 and setting a Swing value for the Arpeggiator engine, to name but a couple of examples.

These kinds of Function-key parameter changes are always a bit of a compromise but a few hours with the BassStation II should find you reaching for them with confidence. It will be interesting to see how Novation include them if, like the original, the keyboard Bass Station II spawns a rack-mount brother.

When programming, don't expect to be overly aided by the display, which is of the numerical, three-digit LED type, only adorned with > and

Sure, it excels in this area, with the enhanced filters producing a wider selection of throbs, stabs and thick, beefy, bottom end, and in this sense, with EDM tastes current enjoying a bass renaissance, its release is timely. But with the inclusion of the Arpeggiator and Step Sequencer, this synth is ready to appeal to a wider range of producers. The Bass Station is back and Version II is a worthy successor to the original.