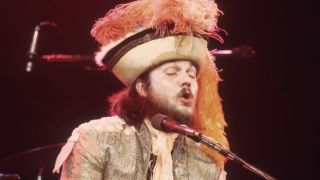 New Orleans music legend Dr. John has died at the age of 77, it’s been confirmed. A message on his Twitter account said that the iconic musician, who was known for his rich musical stew of jazz, blues, pop and psychedelic rock, suffered a heart attack.

Dr. John, whose real name was Malcolm John Rebennack - also known as Mac Rebennack - was a fixture on the New Orleans music scene before he was even a teenager, working as a producer and gigging with local bands.

His guitar-playing career was cut short in 1960 when his left ring finger was injured by a gunshot, though, as MusicRadar discovered in 2015, he didn't abandon it. However, the injury caused him to turn to the piano, which became his trademark instrument.

Having spent time in prison he moved to LA and carved out a career as a session musician, before his voodoo-influenced solo career began in 1968. He released a string of highly-regarded albums, with his biggest hit - Right Place Wrong Time - arriving in 1973. Its parent album was produced by Allen Toussaint and featured The Meters as its backing band.

By this point, Dr. John had become synonymous with the sound of New Orleans, and he continued to record and tour until the end of his life. He was inducted into the Rock and Roll Hall of Fame in 2011.

Stars from the music world and beyond been paying tribute to Dr. John and his unique talent. A selection of tributes is below.

Mac “Dr John” Rebennack, a true friend and fellow musical traveler died today. The Allman Brothers Band family express their sincere sadness in his passing. Mac played many times with the Brothers. Walk on Gilded Splinters our Old Friend, we will all meet up at The Right Place. pic.twitter.com/1EXDzQydlrJune 7, 2019

Rest in funky peace #DrJohn, you were one of a kind. pic.twitter.com/7ZT0jMJMbpJune 7, 2019

So sorry to hear about the loss of Dr. John. We had the pleasure of playing with him a few times. He played a huge part in introducing New Orleans music to the rest of the world. His unique sound and talent will continue to influence for generations to come!! He will be missed. pic.twitter.com/lARtTKUsbDJune 7, 2019