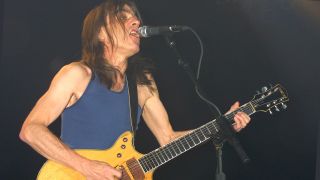 AC/DC's own statement confirmed his passing, reading, "Today it is with deep heartfelt sadness that AC/DC has to announce the passing of Malcolm Young.

"Malcolm, along with Angus, was the founder and creator of AC/DC. With enormous dedication and commitment he was the driving force behind the band.

"As a guitarist, songwriter and visionary he was a perfectionist and a unique man. He always stuck to his guns and did and said exactly what he wanted. He took great pride in all that he endeavoured. His loyalty to the fans was unsurpassed."

Brother Angus Young added, "It is hard to express in words what he has meant to me during my life, the bond we had was unique and very special.

"He leaves behind an enormous legacy that will live on forever. Malcolm, job well done."

Fans and rock royalty alike were quick to pay tribute and share their memories.

It is a sad day in rock and roll. Malcolm Young was my friend and the heart and soul of AC/DC. I had some of the best times of my life with him on our 1984 European tour. He will be missed and my deepest condolences to his family, bandmates and friends.November 18, 2017

So sad to learn of the passing of yet another friend, Malcolm Young. He will be sadly missed. God Bless @ACDC pic.twitter.com/HuEp3kCuyQNovember 18, 2017

Wow...just got off stage here in Brisbane Australia (of all places) to the shocking news of Malcolm Young's passing. So sad...one of the great rhythm guitar players of all time. (James Hetfield and Scott Ian would be the 1st to say so themselves...) #RIPMalcolmYoung pic.twitter.com/qZXHIMpktFNovember 18, 2017

RIP Malcolm YoungLegend.He was the founding member of AC/DC & the engine that roared behind the most powerful band in the world.He wrote Back In Black, Highway to Hell, You Shook Me All Night Long, Highway to Hell, so many songs...Travel safely to the stars, Malcolm.Legend. pic.twitter.com/xfjylBbh4uNovember 18, 2017

It’s sad to hear of Malcolm Young’s passing. He was the heart, soul, & velvet hammer of AC/DC. We’ll definitely miss him. pic.twitter.com/L7hWurwqH2November 18, 2017