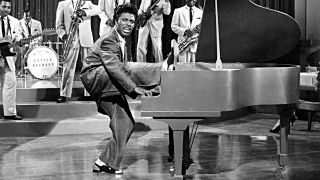 Little Richard, one of the founding fathers of rock 'n' roll, and therefore popular music as we know it, has passed away, aged 87. The legendary performer's death was confirmed to Rolling Stone by his son. The cause of death is currently unknown.

Born in Georgia in 1932, Little Richard - real name Richard Wayne Penniman - smashed to the top of global charts with his 1956 hit Tutti Frutti and its even more successful follow-up Long Tall Sally.

In truth, these breakthrough tracks, along with Lucille and Good Golly Miss Molly in 1957 and '58 were the biggest hits of Penniman's career. At the height of his fame, the flamboyant performer abruptly quit an Australian tour, declaring he wanted to devote his life to God.

Although he made a successful comeback in 1962, his initial early releases remained his most successful and influential; he was revered, alongside other rock 'n' roll titans like Elvis Presley and Jerry Lee Lewis, by artists of the stature of The Rolling Stones, David Bowie, Elton John and The Beatles.

As news of his death broke, stars and fans paid tribute on social media.

I’m so saddened to hear about the passing of Little Richard, he was the biggest inspiration of my early teens and his music still has the same raw electric energy when you play it now as it did when it first shot through the music scene in the mid 50’s. When we were on tour with him I would watch his moves every night and learn from him how to entertain and involve the audience and he was always so generous with advice to me. He contributed so much to popular music. I will miss you Richard, God bless. Mick Jagger

I was once asked, “If u could meet one person, who would it be?” I always said Little Richard. Because, to me, he was rock & roll’s most joyous, rebellious innovator. Thank u for planting that seed, Richard. The world is a much happier place thanks to ur music.#RIPLittleRichard pic.twitter.com/kiq2VOZs8OMay 9, 2020

God bless little Richard one of my all-time musical heroes. Peace and love to all his family. 😎✌️🌟❤️🎵🎶💕☮️ pic.twitter.com/H2lzKbX3tmMay 9, 2020

I’m very sorry to hear about Little Richard. He was there at the beginning and showed us all how to rock and roll. He was a such a great talent and will be missed. Little Richard’s music will last forever.Love & Mercy, Brian pic.twitter.com/kcak6Rf4ReMay 9, 2020

Sadly, Little Richard passed away today. A founding Father of Rock And Roll, his contributions simply can’t be overstated. I had the honor of meeting Richard in his later years and was awed by his presence. He told me, “I am the architect of Rock And Roll.” Amen! ..Rest In Peace. https://t.co/ceQuNU6pkFMay 9, 2020

RIP Little Richard. The man who invented It. Elvis popularized it. Chuck Berry was the storyteller. Richard embodied the Spirit of RocknRoll. Maureen and I were so honored being the first marriage he conducted. Were lucky to know him. He lives forever in the Underground Garage.May 9, 2020