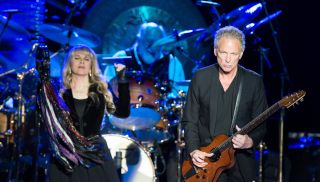 Don't hold your breath if you were hoping to see Lindsey Buckingham back in Mac – founder Mick Fleetwood has ruled out the chance of a lineup reconciliation with the guitarist and vocalist.

Asked by Rolling Stone if he saw a scenario where he'd ever play with Buckingham again, Fleetwood left no room for ambiguity in his response.

"No. Fleetwood Mac is a strange creature," Fleetwood said. "We’re very, very committed to Neil and Mike, and that passed away a time ago, when Lindsey left. And it’s not a point of conversation, so I have to say no."

Buckingham was fired by the band in 2018 and they replaced him with not one but two high profile players; Tom Petty And The Heartbreakers’ Mike Campbell and Crowded House’s Neil Finn.

"It’s a full drama of Fleetwood Mac, no doubt," the drummer added. "His legacy is alive and well, and as it should be. A major, major part that will never be taken away, and never be down-spoken by any of us. Neil and Mike have tremendous respect for Lindsey. The situation was no secret. We were not happy. It was not working, and we parted company. And that really is the all of it."

One former Fleetwood Mac guitarist he will be reuniting with soon is Peter Green, who played a vital role in the band's place in British blues history. The early Mac lineup's star keeps a very low profile these days but Fleetwood confirmed he'll be present, if not playing, at a special tribute concert in London next month.

The Mick Fleetwood And Friends Celebrate The Music Of Peter Green And The Early Years Of Fleetwood Mac is a one-off show at the London Palladium on 25 February.

"He wants to keep a very, very low profile, and that’s fine," said Fleetwood after stating he has been told Green hopes to attend.

"This is about the journey Peter took into the music, and that music is still alive. Everyone that’s on this show has their own poignant story about being connected to that early band."

Fleetwood said he last saw Green around 18 months ago. "I went out with my girlfriend, and spent the day with him," Fleetwood revealed. "He’s not the Peter that I knew, clearly. But he plays acoustic guitar. He loves painting, and fishing is his hobby.

"It’s no secret that he took a left turn and never came back, but he’s ok. He also has really little or no ego at all, which is unbelievable. You want to go, “Do you realise what you did?” “No, no. Yeah, I suppose so.” He has no ego about what he did."

It was a huge honor for me to be playing guitar with the immaculate Andy Fairweather Low , I was mesmerized by his haunting guitar sound , looking forward to Feb 25th more than ever now !! ⚡️📸photo by @rosshalfin 📸⚡️ #andyfairweatherlow #petergreentribute Kirk Hammett