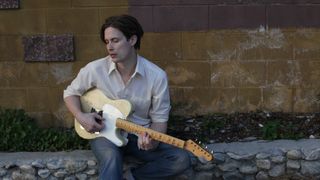 Much like the modern-day king of modern blues himself, Joe Bonamassa, American singer/guitarist Jonny Lang started making waves as a young teen, releasing his debut album Smokin not long after his 15th birthday.

In the time since, he’s gone from strength to strength, becoming one of the main protagonists for a new generation of swampy shuffle and turnaround worshippers, with five albums having invaded the Billboard top 50 and 2006’s fifth full-length Turn Around even scooping a Grammy.

The 38-year-old LA-based, North Dakota-born country blues star returns to Europe in May/June to co-headline the second ever Rockin' The Blues tour, also featuring Walter Trout and Kris Barras, and looks forward to bringing the sounds of 2017’s Signs to new audiences…

“It will be a five-piece band including me,” he tells MusicRadar, in his quietly polite and almost shy Cass County drawl. “My current line-up includes Barry Alexander on drums, Zane Carney on guitar and Tyrus Sass on keys, so it should be a lot of fun.

“Because that’s what Signs was all about: we had a good time making this record, though we didn’t put an awful amount of thought into it beyond just writing songs and going through them. It didn’t take a long time to record the basic tracks, maybe three or four days, so it all happened nice and quick.”

Opting for a less-is-more approach with his gear as much as his leads, naturally there won’t be too much equipment travelling with him. For Lang, it’s more about having sonic purity than a wide tonal palette…

“I haven’t had a new pedal on my 'board in a long time,” he confesses, with a laugh. “I kinda just stick to the same stuff I’ve always used: my Les Paul or Telecaster with a couple of drive pedals, a wah-wah going into two Fender Deluxes. It’s a pretty simple rig.”

What about the crackly fuzz tones heard on tracks like Snakes, Stronger Together and Bitter End, we ask…

“Most of this last record was done using this old five-watt National amplifier. I don’t really recall using any pedals; if I did, it was only on a couple of occasions. Most of what you’re hearing is that amp on full and one of my two main guitars.

“Some people can use just one guitar and make it sound like anything. Other people need more, I guess, haha! It all depends on what you listen to or like, and personally speaking, what I prefer to hear is either a Telecaster or a Les Paul!”

1. Learn the right vocabulary for your music

“I’m not sure if I’ve given it much thought, in terms of quantifying the whole musical experience. I just love it and really mean it. That’s the main thing, in terms of what I’m doing, is to feel it and mean it. And in order to do that, I find it comes down to how many words you know in the language of music.

“Ask yourself, ‘How vast is my vocabulary?’ Once you have enough words, when the time comes, use the right ones and try your best to convey your emotions through all the things you’ve learned…

“I try not to overthink it too much, though. I’ve always tried to pick things up over the years and keep learning, but when it comes to writing or recording, I won’t give it too much thought. I’ll swing for the fences and see what happens - hopefully some of it will be good enough to keep!”

2. Have a musical conversation

“I definitely think I approach my lines more like a vocal melody, for sure. I think of solos like a conversation. I’m sure there’s a famous BB King quote saying something similar. And they should be conversations that make the song better, rather than just being a solo in between vocal parts.

“I think that’s what a lot of the really great players have in common: they make their solos a really appropriate part of the song. I’m at a loss for explaining a lot of this stuff beyond that. I don’t know much about the music theory behind what I do; like I said, it’s more about the feel and emotion.”

3. Learn from the greats

“When it comes to vibrato, I’ve always looked up to BB King and Albert Collins. And, come to think of it, Albert King! There are so many different types of vibrato out there, but those three are the ones who have always been my favourites.

“And in terms of great guitar players that are still alive, there are still many that are important to blues music. Buddy Guy is a big one for me; he’s probably the guy right now when it comes to the proper legends.

“I remember seeing him play at some point early on in my career, just watching him go crazy on stage. He wasn’t thinking about it at all. That’s what made me realise it’s okay to be reckless when you play music. That’s perfectly fine. It can actually help push you into a different place - that guy is the master of that. He’s amazing.

“As for the country side of things, I would say a lot of the guitar work on the early George Jones stuff from the early-'50s was a big influence on me. To be honest, the singing and the guitar playing on those older records was always up there in my list of favourites.”

“One of the thoughts we had going into this latest record was making sure we didn’t overly cut tracks and beat the songs to death. If it wasn’t happening for whatever reason, we’d ditch it and move on and try something new.

5 guitar tricks you can learn from Jonny Lang

“Okay, some mistakes can be a little too drastic, but it can be nice to leave a little edge on things and can make for a better all-round picture or sense of what you are doing. Those imperfections can be the best parts of a recording!

“Even when it comes to my tone, I actually prefer the less-perfect room sounds. In the studio I will have a microphone up close to the amp and usually at least one more further away, by several feet or more. And I’m pretty heavy on that in my final mix - it brings this warmer tone with the directness and treble of the close-up sound rolled off.

“I’ve always felt that if you can hear the room in your recording, it will make people feel more like they’re actually there.”

5. Not all guitars are created equally

“I love playing acoustic guitar, but it can be a challenge to get something more than a stock tone out of them. I love the sound of Martin acoustics, but I also like 1980s Yamaha acoustics that cost only $100 and still sound amazing. I’ve also found guitars that cost thousands that don’t sound too good…

“I’ve got to give credit to our engineers, as well as [Nashville production team] Drew and Shannon. They were responsible for a lot of those great tones on the record Having the right engineers and co-producers were a big help on this last album, more than the list of equipment.

“Remember you have to pick up each instrument and play it individually to find out whether it works for you… they all vary, but I must admit like Martins especially.”