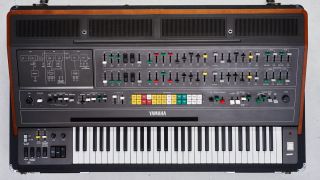 When talk turns to re-imagining a classic synth, it’s almost inevitable that Behringer will join the conversation sooner or later. And, right on cue, boss man Uli Behringer has started stirring the pot following Yamaha’s revelation that it might be considering bringing back the CS-80.

The action has been playing out on Facebook, firstly with a post from Uli Behringer that shows the label on the back of an original CS-80.

The meaning of the phrase “I’ve been thinking about this” is open to interpretation. Perhaps Uli is considering cloning the synth… or maybe he’s wondering about the ramifications of doing that given that the words ‘Patent Pending’ are there for all to see.

It wasn’t long before another social media grenade landed; this time, a couple of shots of an original CS-80 to confirm that, yes, Behringer does indeed have one.

What this means remains to be seen, but Behringer does have form when it comes to stealing other synth manufacturers’ thunder.

Back in 2017, the company chose to ‘leak’ a shot of its MS-101, a clone of Roland’s SH-101, on the day that the Japanese company launched its own revival in the shape of the SH-01A. Clearly, Behringer doesn’t have a completed CS-80 clone to trump Yamaha with in this case, but we certainly wouldn’t put it past it to make one...