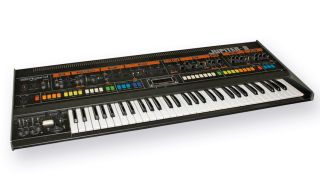 We can’t seem to keep up with the sheer weight of speculation surrounding the Music Group’s upcoming hardware release schedule.

Most recently, we had teased shots showing the innards of what turned out to be the Neutron, then along came OB-Xa and Roland VP-330 clone announcements.

Today, the company is at it again. Could this shot of frolicking employees imply that they'll be working on cloning Roland’s classic 1981 polysynth, the Jupiter-8, and the corporation’s second most famous drum machine, the TR-909?

It has to be noted that Behringer is an extremely savvy outfit when it comes to social media, so it absolutely must have known exactly what speculation this post would generate - and it's not exactly discouraging it in the comments thread. Or its team could just be playing with old instruments because they can.

So, yet again, we're left wondering if this will happen at all - or even if the likes of Roland would allow it? Either way, watch this space - we’ll bring you more news as it becomes available.