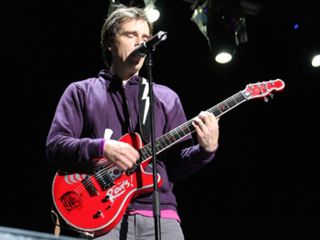 Last week we told you that Weezer were "close to a wrap" on their upcoming 7th record. Well, now we bring you videos of a couple of the cuts that will be on that disc.

While there are some last bits to finish on the album (as well as mixing and mastering), Weezer feel confident enough to debut two new tracks live, as they did at the Jisan Valley Rock Festival in Soth Korea the other day.

On both songs, I'm Your Daddy and The Girl Got Hot, frontman Rivers Cuomo sets down his guitar and channels his inner Rod Stewart. (Meanwhile, regular Weezer drummer Patrick Wilson plays guitar as drum ace Josh Freese mans the skins.)

Even though both songs are rendered via fan-shot YouTube videos, it's evident that the usual Weezer hooks are in abundant supply. (The Girl Got Hot even features a Gary Glitter-esque floor tom beat and a "whoa-whoa" chorus - how catchy can you get?)

The Girl Got Hot