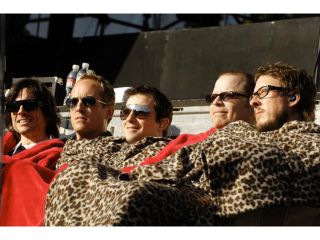 Weezer have been doing anything but laying low. Having released their eponymously titled 'Red Album' last year, the group are "close to a wrap" on their 7th record - the color of which is yet undecided.

In a lengthy post on the Weezer website, the group writes, "The bands 7th album, title TBA, is pretty close to a wrap now (after a mild false alarm back in the spring), though there is some work yet remaining to be done. There have also been some other special Weezer studio recordings done recently."

Weezer don't elaborate on what those additional recordings could be, but they do drop hints about a "special non-physical release."

The much-in-demand Freese is not an official member of Weezer; he's merely filling in while the band's regular drummer Patrick Wilson takes over on guitar, which he has been known to do in the past for varying periods of time. (Wilson rocks a nice keyboard too - talented guy, basically.)

The band have confirmed on their Twitter account that they'll be unveiling a new song on tour called She Got Hot. Wonder if it'll sound anything like their cool take on MGMT's Kids that mixes in Lady Gaga's Pokerface? You never know.